A book in the Once Upon a Time in the West series, published October 2, 2012.
Genre: historical romance
Cover: very nice, love it. 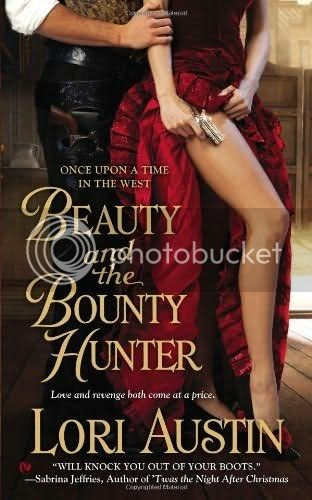 Cathleen Chase is no killer - but as Cat O'Banyon, she is a ruthless bounty hunter who always gets her man. Catching one lowlife after another, she continues her search for the only man she really cares to locate. The one whose voice she will never forget; the man who murdered her husband. She'll stop at nothing to find him.

Con artist Alexi Romanov taught Cat every trick she knows. He is a master of deceit, disguise, and desire. He's difficult to trust, and even more difficult to resist, but he has news she can't ignore. The man she's after has placed a bounty on her head. To get him before he gets her, she'll have to team up with Alexi again....And just like before, the two of them together are nothing but trouble.


I have been a fan of Lori Handeland’s nightcreatures novels for a long time now, and when she went back to her roots as an historical romance author, I had to follow. As not to confuse her fans, she uses the name Lori Austin for those books. I’ve already read some enthusiastic reviews about this book, so I was eager to start reading it, and I certainly was not disappointed.

The book kicks of with a lot of action, which is something I love as it drags you into the story at once, wondering what has happened. Cat O’Banyon is a bounty hunter in the Wild West, and she has a reputation of always getting her man. She doesn’t mind dressing up as a hooker, or saloon girl, or anything else, if in the end she can take him in, and ask him the question she asks all the criminals: “you or she?”
Cat is hunting for someone, and she only knows she will recognize his voice. But the trademark is making her notorious as well, and now someone has put a huge bounty on her own head. Luckily, her old friend Alexi Romanov has heard about it, and he tracked her down to warn her, just in time to safe her, or so he thinks. Cat is convinced she would have saved herself though.

They end up travelling together again, and with Alexi’s big friend Mikhail. During their travels, their histories are revealed, bit by bit, and I loved both the adventurous journey, and the personal stories. Which I am not going to spoil for you.


Lori Austin has written a very good historical western romance, and she does not shy away from some of the heavier topics concerning the war between the states and the cruelty of men. It was really kind of heartbreaking to read about it.
I did love Cat, and her kick ass character, she was above all practical. She took care of herself. She started out as a farmers wife, a pioneer’s woman, and one criminal changed all that. Alexi teached her everything she wanted to know, how to shoot, how to kill, how to defend herself. How to con people. He also thought her about disguises, and passion, and how to play cards, to cheat, and how to spot a fellow cheat. Everything she needs to survive.

But then there is Alexi, a man to dream about. Of course he is a con artist, who doesn’t mind taking someone else’s hard earned money, but well. He is gorgeous, he speaks several languages, or at least the endearments and the cursing, and he takes care of Cat and Mikhail. He really has a tortured past, so you tend to overlook his bad points. They were just fire together, and I absolutely loved reading this book.
And I have to write it, I hate her brother in law even more than the real villain in this book. There are no words for this piece of slime.

This book is filled with action, with hard memories but also sarcasm, friendship, love and some good lovescenes. I loved it all.

I do recommend this book to all lovers of something new and original in historical romance.