Colleen Gleason – The rest falls away – Read for #LLC2015 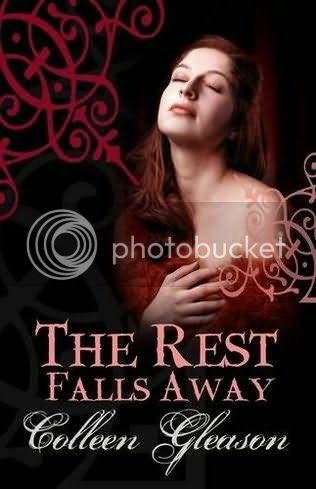 Beneath the glitter of dazzling nineteenth-century London Society lurks a bloodthirsty evil...

Vampires have always lived among them, quietly attacking unsuspecting debutantes and dandified lords as well as hackney drivers and Bond Street milliners. If not for the vampire slayers of the Gardella family, these immortal creatures would long ago have taken over the world.
in every generation, a Gardella is called to accept the family legacy, and this time, Victoria Gardella Grantworth is chosen, on the eve of her debut, to carry the stake. But as she moves between the crush of ballrooms and dangerous moonlit streets, Victoria’s heart is torn between London’s most eligible bachelor, the Marquess of Rockley, and her duty. And when she comes face to face with the most powerful vampire in history, Victoria must ultimately make a choice between obligation and love...


When Victoria Gardella Grantworth is having some strange dreams, she knows it is time for her great-aunt to tell her about her legacy. And when her aunt tells her about the Gardella family legacy of being vampire hunters, she accepts her duty. And so her training begins with her aunt, and her aunt’s servants. To fight with a stake, a sword and with her body. As a Gardella, she is stronger and faster than most humans, and with her sacred amulet embedded in her body, she will also heal faster. Imperative when fighting vampires, as they are so much faster and stronger than humans.
As she is about to make her debut, she is well situated to take out the vampires preying on the ton. Whenever her neck stars to feel cold, she knows one of the evil undead is near. But she is not the only vampire hunter in the city, there is Max. A friend of her aunt, and not a vampire hunter by birth, but by choice, as they killed his whole family. He doesn’t like Victoria at all, and thinks she should just go back to being a debutante and leave the slaying to him.

To her surprise, her maid knows all about vampires, and has some very ingenious ideas about how to hide stakes and garlic and holy water on her person. She also comes with her on some undercover missions to find out where the Book is that Lilith is looking for.

Victoria really means well, but she is very naïve about the dangers of vampire hunting, and her aunt hasn’t told her enough yet about the different types of vampires and their strengths. But she is determined, and with some unexpected help from a dangerous but seductive man, she finds what she is after. But to win this fight, Max and Victoria have to work together, as a team.

And then there is the Marquess of Rockley, who really seems to want Victoria as his wife. Victoria really likes him as well. Especially when she finally remembers when she has met him before ... But can she deceive him? Even after they marry? Or will she regret her decision to become a slayer after all?


A compelling story, that kept me glued to the pages. Victoria is torn between her duty to her family legacy, and the wishes of her mother to snatch the most eligible bachelor. She really likes going to balls and dancing and everything else it entails, but she is running out of excuses to suddenly leave an event to slay a vampire. And sometimes she will have to go out in the middle of the night with Max when they get word about a vampire action.

At first it was a bit of a game to Victoria, slaying vampires, but when her loved ones are in danger, she finds out what it really means and how hard the choices are she has made.

I liked the world building, and the history of the vampires. And the ending sure makes me want to read the next book right away. Colleen Gleason has written an intriguing first book in a series, and I will certainly read the rest soon. I haven’t read many paranormals set in the past, and I do enjoy it.