The sixth book in the Rogues of Regent Street series, published April 30, 2002.
Genre: historical romance
Cover: romantic. My book has the smaller picture as its cover. 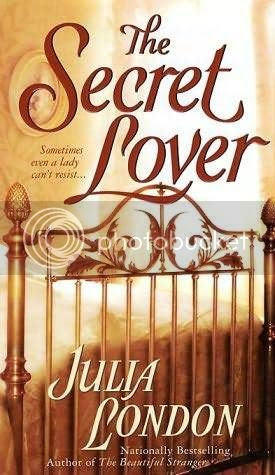 Eight years after fleeing England in the wake of a terrible scandal, Sophie Dane is no longer the trusting debutante betrayed by love. Now as companion to a worldly French widow, she returns to London where her arrival instantly sets tongues wagging?and attracts the roving eye of aristocratic Trevor Hamilton. But it is his mysterious brother, Caleb, in whom Sophie senses a kindred soul--and who captivates her as no other man has before. Reared on the continent, Caleb has come home to his ailing father--only to be shunned by society as a fortune-hunting imposter. Sophie, alone, seems to believe in him. But an unexpected series of events sets them both in flight once more. As scandal pursues them to a remote ancestral estate, a man and a woman haunted by the past will defy every convention on earth for a future in each other's arms?


Julia London is one of the writers who comes to the LoveLetter Covention 2015 in Berlin. The secret lover is the sixth book of the ‘Rogues of Regent street’ series. But you don’t have to read the other books first to read this one. The Secret Lover can be read as a standalone.

Eight years ago Sophie Dane made a mistake. She fell in love with a rake and he convinced her to elope with him to Gretna Green but during the wedding night she found out that he wasn’t the nice man he pretended to be. So after a short period of marriage, she left him and divorced him. This was of course a big scandal in London, so Sophie fled from England to France where her sister Eugenie lived. There she met a French widow named Honorine Fortier who was looking for a companion and so started her new life.
After travelling for eight years, Honorine decides to go to London and Sophie has to go with her. Sophie tries to attract no attention on her person or the fact that she’s back in London. Most of the time she stays at home or she goes to the park. It’s there that she meets Caleb Hamilton. There’s an attraction between them but both of them have secrets. And to complicate things, there’s also Caleb’s brother Trevor Hamilton, who wants to court Sophie and who has the blessing of her family. They’re hoping that that way Sophie can come back to society.
But the more time Sophie spends with the two brothers the more she has a favor for one of them and it’s not the man that her family approves of. But can she disappoint her family for a second time? Can she trust her heart for a second time or will she this time do what her family wants her to do?
Caleb Hamilton is a bastard. His father is an English aristocrat. Because of his illegal birth he has led a lonely life. Now he’s in London to be closer to his ailing father but his half-brother Trevor is keeping their father away from him. And Trevor is also spreading rumors that Caleb is a fortune-hunter impostor, who’s only after their father’s money.
Caleb has always believed that because of his illegal birth, it’s best to forget about love but then he meets Sophie and falls in love with her. But what can he offer her? But yet, how can he let her go? His one chance for love and for happiness.


So, here you have two lost souls that are not accepted by society but who long for love.
What very intrigued me about this book was the fact that Sophie Dane was a divorced woman in the Regency period. This was a big scandal!! This is a time where you were married for life in both good and bad times. You never divorced! But here you have a woman who did just that.
I loved both characters. Their loneliness, the fact that they tried to built a life although both aren’t accepted by society but for different reasons. As reader you see Sophie grow from an innocent girl to a mature woman who’s not afraid to follow her heart and choose the man she loves and that way goes against her family’s wishes and society for a second time.
After reading this book I’m really looking forward to meeting Julia London in Berlin.