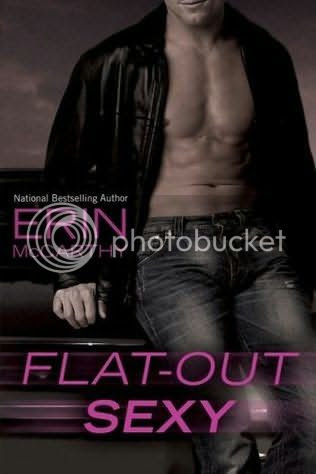 She met him at the racetrack...
... which was the last place Tamara Briggs wanted to find a man. Even a deeply intriguing, seductively sexy man like Elec Monroe. Tamara’s a single mother after losing her daredevil husband in an accident – and she;s not about to get involved with another driver and put her kids, or herself, through that again. Besides, Elec’s young enough to be her ... younger brother.
Now things are moving a little too fast...
But he sure does get her heart racing. And after she’s tricked into a blind date with him, Tamara gives in to her passion. Things screech to a halt, though, when he asks to meet her children. What ever happened to wham-bam-thank-you-ma’am? Suddenly Tamara has to decide how big a risk she’s willing to take to experience the thrilling, terrifying power of true love...

Tamara’s husband was a race car driver, and he died in an accident on the tracks, leaving her behind with two young children to raise on her own. Her son Petey is not such a big race fan, he is more interested in animals (meaning bugs) and science. Her daughter Hunter though is a big racing fan, and as both their godfathers are fellow race car drivers, she knows all about the game. Her bedroom seems to be a collecting bin for race car offal. Used tires, a flag, other bits and pieces of cars. She wants to become the first female driver when she grows up.
Pete’s parents are helping her out a lot and after two years, Tamara is finally reading to date again. But her current date Geoffry, a collegue, is a dud. She leaves him standing at the party she took him to, and doesn’t care about her overnight bag. She will not spend another night again with that bore of a man.
Luckily Ryder, her husband’s best friend, offers her his trailer to stay the night in, when she has also misplaced her purse. Elec is going back to the track as well, and they share a cab. Tamara run into Elec earlier that evening, and the attraction between them is sizzling. She thinks Elec is a mechanic on Ryder’s crew, so he should be safe. She does not want to risk falling for another race car driver ever again, always afraid when he is racing of another crash and such. But Elec falls for Tamara hard, and when she find out he is a driver after their hot night in Ryder’s trailer, he won’t give up on her.

When they start seeing each other on Monday afternoon, just to have sex, Tamara is not sure how she can handle it. Her father in law has some kind of feud going with Elec’s father, and he will certainly disapprove of her relationship with Elec. And how will her children react to him? But when her children get sick with the chickenpox, she is very glad when he comes over for a visit, bringing dinner for her, and toys and stuff for her children. Ryder and Ty show up as well, but they leave soon enough. Tamara is very unsure about her body, her husband Pete used to joke about her stretch marks, but it hurt her more than she knew. And why does Elec wants her, when he can have that gorgeous younger woman who keeps texting him photo’s of herself?

But Elec wants a real relationship, he wants children and as he cannot have them himself, he really is ok with Tamara having children already. He likes them, and they very quickly like him as well. I loved the scene where Elec is fetching Petey from school, and when the teacher hits on Elec, Petey interferes and tells her his mom is dating Elec. Which he did not know was true at that moment.

Of course Elec is away a lot, racing all over the country, but his spare time is spend with Tamara, and they fall in love with each other. But can Tamara live with the fear of losing another husband on the track, especially after Elec has a minor crash? And can she subject her children to the same loss again?


I enjoyed this book so much. The relationship between Tamara and Elec grows naturally, and they both have their doubts about themselves, but they are great together. Elec fits in with her children as well, he is much more mature than the other race car drivers, who are kind of horn dogs. Yes, I know they will find their loves as well in this series, but for now, they like their groupies.
I already know the story of Ryder and his ex-wife Suzanne, and to see them fighting in this book was fun. Ryder is still truly clueless about why his marriage failed.

Erin McCarthy brings her characters really to live, and I liked them all. Her sex scenes are very hot, but very well written too. There was never a moment where I wanted to skip a scene, or thought, hmm that does not seem possible. And there are plenty of those as well, and they do fit the story perfectly. It is not a book like, o we are 10 pages further in the story, time for another sex scene. I also love her sense of humor, and how it translates into the different characters. Some snark, but also some very sweet scenes.


Yes, I am a big fan of Erin McCarthy’s writing, and I still have many more of her books to read.

I had read some books by her, but two years ago Erin McCarthy was an author visiting the Love Letter Convention 2013, so I started reading more of her books, and I fell in love with her writing. It was fun to meet her, and interview her back then for my blog. And ever since I have been collecting her books, and reading them regularly. I look forward to meet Erin again at the Love Letter Convention 2015 in Berlin, Germany, and have her sign some more books.