A book in the Bad Boys Undercover series, published August 1, 2005.
Genre: contemporary romancy
Cover: so not fitting the book. 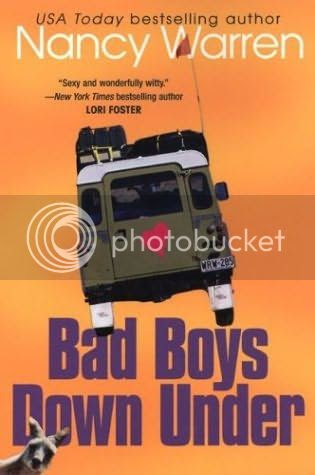 Sexy, macho Cameron Crane knows he needs San Francisco marketing guru Jennifer Talbot to take his Australian surf and boogie board business into the lucrative American market. No worries, mate. He’ll just seduce the little sheila. It’s not the first time he’s used his considerable skills in bed to get what he wants. And no one’s ever complained. But the minute Cameron lays eyes on Jen, he’s got the feeling the adorable, whip-smart business lady can see right through him – and he’s never been more turned on. Now, cornering the market on pleasuring Jen is his number one goal ... one he’s ready to fully commit to ...


Cameron Crane knows he really needs Jennifer Talbot to help him take the American surfer market by storm, and make his name known there. But he refuses to have a woman in charge, so if he seduces her, he will be in charge, right?
When a weary Jennifer arrives in Australia, a car is waiting for her, but it is not bringing her to a nice hotel, but to Cameron Crane’s private residence. She did not expect that. Nor did she expect him to wait for her, naked, in his hot tub out doors, wanting her to join him. She rebuffs his attempts at seduction, though the man is certainly worth some looks! But she has a fiancé back home, and is just not interested. But to Cameron, if there is no wedding date set, then an engagement is nothing at all. Certainly she is not in love with a dusty accountant!
Cameron’s housekeeper knew the plan would backfire on him, and takes Jen to her room, where she can finally freshen up.

And the next day, she is determined to keep her cool and stay professional, and do the best work she can. The sooner the better so she can go back home! But Cameron is impressed by Jennifer, and keeps trying to get her to take some time of, go out with him, and experience the surfing scene first hand. And to her surprise, Jen really likes it. But can she keep saying no to Cameron’s kisses?

Part of the job, is finding a suitable “face” for the American commercials. They really need a good looking man for the job, and when Jen finds him, and is in rapture about him, Cameron finally knows what jealousy is. And it is not an actor or a model, but an out of work steelworker. Used to working on bridges and such. A man who knows how to use his muscles, whose tan is real too.


I really enjoyed this story, the characters, the setting and the Australian slang thrown around. What I liked most is that Jen did not jump into bed with Cameron while still engaged, and it was not an easy or hasty decision for her either. I liked them together, and dealing with others. Jen refused to let Cameron dictate to her, and I admire that in a heroine.

Yes, fun and romantic and hot story, all in one.

Handling the advertising campaign for Crane surf and boogie boards is hard-working ad exec Lise Atwater’s dream job. But turning their Australian surfer boy into a product spokesman is going to take a lot of work. Hunky Steve Jackson is a muscular, take-me-as-I-am kind of guy who thinks he’s in the States to party and bed women. It’s ridiculous, and if Lise weren’t so suddenly preoccupied with picking out a new bikini and donning high heels around the office, shed tell him so. But when the ad campaign moves behind closed doors, it’s clear that neither is selling the other anything ... and the white-hot ecstasy is completely mutual.


The Australian “model” for the American ads campaign stars in this novel. Steve has taken the job just for the money, and the idea of a paid vacation in the States. But now he has to learn how to be a model, and Jen’s friend Lise Atwater is just the woman for the job. But from the first moment, they misunderstand each other. Steve thinks Lise is a party girl, always in for a good time, and Lise thinks Steve is a professional model, and she needs to show him a good time.

They were really great together. Lise is very insecure about herself, and really prim and proper, and clumsy, while her assistant is very gorgeous and flamboyant. But Steve makes her look differently at herself, and shows her what he sees in her. And together, they are such a great couple. But can they really have a future together, with him in Australia and her with a career in the States? His modelling job is just a one time thing, right?

Being dumped by his fiancée, Jennifer, for that barely civilized playboy Cameron Crane has left Mark Forsythe in a funk. From now on, the straight-arrow Mark is going to be as bad as they come. He’s decided to sow his wild oats down under. On his first night, the novice bad boy ends up passed out in slinky Bronwyn Spencer’s bed. Though nothing happened, Bronwyn’s happy to let Mark think they’ve shared a night of passion so hot, he’s got to experience it again. And she has every intention of showing the terminally “good” Mark just how delicious a walk on the wild side can be, if you’re willing to put your heart in it...


What happens when a woman who is lousy with money meets an accountant?
Bronwyn is Cameron Crane’s half sister, and she works for him, designing clothes for the surfer line. She is good at her work, but lousy with money. She has lots of friends, and she likes helping them out, but they don’t always pay her back. So now she is kicked out of her apartment, due to some loud parties, and a creditor is after her for something else. So why shouldn’t she stay for a while at the company’s guest house? It is big enough. And does Mark really mind? Even if he does want to sleep with a different woman every night?
The problem is, Bronwyn really likes Mark, and she has no intention of letting some other woman have him. And so she quietly spreads some rumors about him, to keep her “frenemies” at bay. He is gay, he is tiny, you name it. And so they end up spending lots of time together.
But will Mark forgive her when he finds out about it all? And that he never got the chance to be a bad guy, and he really is a one-woman-man? Will he chase her when Bronwyn quits her job after her brother’s scolding?


Another great story. These books are so much fun to read! I love all the characters, and especially how those three books are linked. Jenn and Mark were more friends with benefits, than really in love, so it was not so strange to see them become friends again.
I have never met a heroine like Bronwyn though, a party girl, very friendly, but still picky about who she sleeps with. And not even Mark is allowed to take her for granted in his bed. She is a very good friend, even though she gets burned a lot, and has no clue how to handle money. Lucky for her, Mark knows just how to deal with it all. And he does not mind teaching her at all.

So, three fun, hot and romantic stories, all to do with one surfing company and its employees. I enjoyed it very much. Nancy Warren also told me those stories will be republished as the Crane series, so if you see them, do snatch them up, you won’t be sorry.
Nancy has a very nice writing style, she sucks you into the story from the first sentence, and she will make you laugh. And sigh. And close the book with a big smile.

A total of 8 stars for the whole anthology.