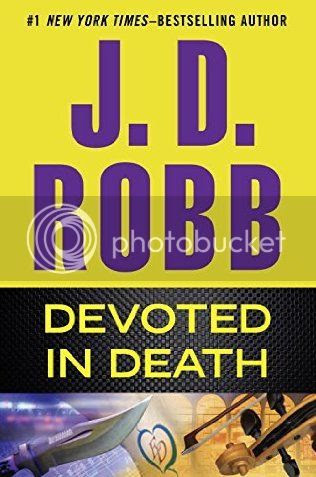 When Lieutenant Eve Dallas examines a dead body in a seedy alley in downtown Manhattan, the victim's injuries are so extensive that she almost misses the clue. Carved into the skin is the shape of a heart and the initials E and D…
In Oklahoma, Ella-Loo and her recently released ex-con boyfriend Darryl, don't intend to part ever again. So they hit the road, but then things get a little messy in Arkansas and they wind up killing someone. It's an experience that strokes a fierce, wild desire in Ella-Loo and Darryl: to kill again.
As they cross stateliness on the way to New York to find the life they think they deserve, they leave a trail of evil behind. But now the duo has landed in the jurisdiction of Lieutenant Eve Dallas and her team at the New York Police and Security Department. And with her husband, Roarke, at her side, Eve has every intention of hunting down the killers and giving them exactly what they truly deserve…


I know, book 41 in the series, and I am still hooked. It is 2060 in New York, and after a short vacation with her husband Roarke, Lieutenant Eve Dallas is back on the job. With her long time partner, Detective Peabody, they get a new case in the early hours of a very cold winter morning. A body has been found in a seedy alley, but that is not where he has been killed, nor was his death easy. The man, who was a gifted musician and composer, was tortured for days before he slowly bled to death. After investigating his life, his family and friends, Eve comes to the conclusion he must have been a random victim, especially when she starts a search for like crimes, and finds dozens of them. The FBI is on the case as well, but they haven't done much except making a profile. And even happens to disagree with them, as she keeps unearthing more cases that fit.
When Deputy Will Banner from a small village in Arkansas gets notified of her computer search, he sets out to New York to speak with Eve in person. He has a case that everyone has ruled as accidental death and he just doesn't believe it. He knows his victim was murdered. The feds don't believe him, or about some other cases he has found, as it doesn't fit their profile. But he knows he is right, and it is important to find out who the killers are, to go back, and trace their trail to where it began, which is exactly as Eve is doing.
And so Banner is added to her team, and is helping with the investigation, while two of her own are send into the rural wilds of Oklahoma and Arkansas to find out more details, and trace their leads.

It is a great book, and I was glued to the pages until it was finished. It is not a case of "who is the murderer" as we know that already, but Eve doesn't and she needs to find them in time to save their next victims. And that was just so good to read. The suspense, when the killers have the pagetime, abducting their victims and experiencing their rush. They are escalating, and it is a race against the clock for Eve.

There was not much development in the personal lives of Eve and her team and friends. Just a few nice scenes, but overall, just hard police work. A good, solid story, with really deranged killers to catch.