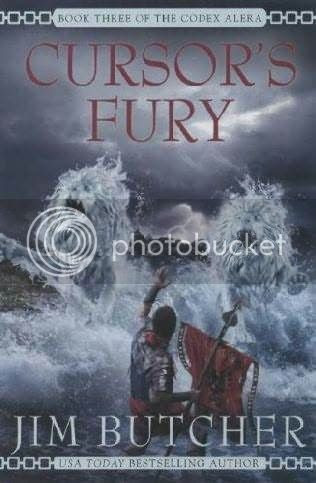 In his acclaimed Codex Alera novels, bestselling author Jim Butcher has created a fascinated world in which the powerful forces of nature take physical form. But even magic cannot sway the corruption that threatens to destroy the realm of Alera once and for all…
When the power-hungry High Lord of Kalare launches a merciless rebellion against the First Lord, young Tavi of Calderon joins a newly formed legion under an assumed name. And when as the ruthless Kalare allies himself with a savage enemy of the realm, Tavi finds himself leading an inexperienced, poorly equipped legion-the only force standing between Alera and certain doom …


I really enjoyed the first two books in this series, and I have no idea why it took me so long to pick up book 3 in the series. I am absolutely not sorry that I did, as I loved the story. And after finishing it at 02.37 on a Monday morning (luckily, I was free that day), I started book 4 when I woke up again.

I love that this series does not completely focus on one hero, or heroine, but that more main characters are followed, when they fight for the realm. In my opinion, the main hero is Tavi of Calderon, a young boy who doesn't know his real heritage, who doesn't have the magic post people do have, but who is smart and resilient, and manages to save the day when it counts. Of course he fails at times as well, which keeps him human. It is based on the Roman empire, especially the army, although I am absolutely not an expert in that area. But the armour, the weapons, the names of the different ranks, all point to that. And I like it.

Two of the High Lord's want to take over the position of the current First Lord, who is getting older and has no Heir. Both are not a good choice, as they would only benefit themselves and not the people of Alera. Not that the current High Lord is a very good ruler, but he manages well enough and is extremely powerful. Gaius Sexus is the current High Lord and he is loosing power and influence fast. By playing his two main enemies out against the other, he hopes to survive a bit longer until his Heir is ready to be announced. Countess Amara is his most trusted Cursor, often away on missions for the Crown. She is secretly married to Bernard, Count of Calderon, and Tavi's uncle. Cursor's are not allowed to marry, but oh well. Some rules are meant to be broken.

Tavi is sent to the newly formed Legion of Alera, as the third subtribune of the Tribune Logistica. His good friend Max will join as well as Centurion, and weapons trainer, and their former Master, also a Cursor to the Crown, will join as Senior valet. This does make Tavi something of an officer, and as he doesn't know anything about the army, Max and Magnus will have to teach him as much as possible on their journey to the Legion.

Of course, a ploy to keep Tavi away from danger and out of the public eye and his many enemies, always backfires. Because when the High Lord of Kalare attacks the rest of the realm, his legion is sent to defend an important bridge. And when Alera is invaded by over 60.000 Canim, that bridge is essential to keep them from overtaking the rest of the country. The Canim don't use fury's as the Aleran's do, but they are not without magic altogether, and their first strike, is as deadly as possible, as it wipes out the commander's tent during a planning strategy. And suddenly, Tavi finds himself in charge of the Legion, as the highest ranking officer left….


I really like Tavi, he is young and so very resourceful and wants to do his best for all the people of Alera, and somehow he manages that. In the previous book he made a bond with Kitai, a young girl from the Marat, and she has followed him to his new post. It takes a while before he discovers her, but after that, they stay together whenever possible. She is a great help for him, with her different look at things, being so very alien at times.
I also like Max a lot, Tavi's best friend. Max is the bastard son of one of the High Lords, who never acknowledged him, and his wife has been trying to kill Max for years. So when his halfbrother is another Centurion in the Legion, his stepmother has joined as well, to keep her son safe. She is a gifted healer, something a Legion is always in need off. But she has some other reasons as well, as she is Kalare's younger sister …

If you like fantasy, intrigue, politics, corruption, fighting, magic, different races, you really should try this series. I love it.