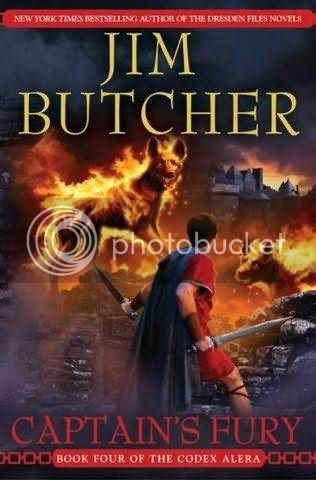 After two years of bitter conflict with the hordes of invading Canim, Tavi of Calderon, now Captain of the First Aleran Legion, realizes that a peril far greater than the Canim exists-the terrifying Vord, who drove the savage Canim from their homeland. Now, Tavi must find a way to overcome the centuries-old animosities between Aleran and Cane if an alliance is to be forged against their mutual enemy. And he must lead his legion in defiance of the law, against friend and foe-before the hammerstroke of the Vord descends on them all.


Book 4 takes place 2 years after the adventures of Book 3. The civil war is still going strong, High Lord Kalare is ruthless, and he has many experienced soldiers and strong magic at his disposal. The war against the Canim is also still being fought. Tavi is the Captain of the Legion, and his soldiers admire him, and are very loyal to him. But disaster strikes, when politics rear their ugly head. One of the Senators has determined it, that he will replace Tavi and lead two other Legions into the battle, and they will wipe out those barbarian animals. Why hasn't Tavi done that yet?
The Senator has no idea about war, it is all abstract to him, and people's lives mean nothing to him. Not his own soldiers, certainly not the enemy, or the helpless Aleran people caught in between. And so, after some intrigue, Tavi finds himself arrested on the accusation of treason, and send to prison.

Tavi is not interested at all at staying there. He has a plan to make an end to the war, freeing the three legions to join the fight against the High Lord of Kaldera. And as he has just found out about his true heritage, he has the means to do so!
And with the help from his loyal friends, he sets out to spring the previous ambassador of the Canim out of prison in the capital city of Alera, while being pursued by some lethal assassins, employed by the Senator. Or rather, the other High Lord he has sold himself too….

Meanwhile, the First Lord is on a dangerous mission of his own, with the help from Amara and Bernard of Calderon. And that certainly doesn't go as planned …


Amazing story, and again it kept me up way too late, and this time I had to work the next day. I love seeing how Tavi grows, and comes into his own. He has become a man, a real leader with a great sense of honor and duty. He even starts learning some magic, although he still cannot manifest a Fury of his own. Kitay is still at his side, as are Max and his halfbrother. When Max's stepmother disappeared, he finally got to build a relationship with his halfbrother (who is just as powerful and their father's Heir).
One of their most trusted officers is not who he seems to be, and his loyalty might be in question … or not?
I loved the interactions with the Canim, and how Tavi has learned their ways and customs. I look forward to reading book 5 very son.