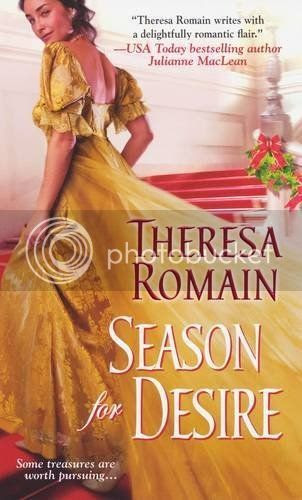 Properly Wicked
Like her four sisters, Lady Audrina Bradleigh is expected to marry a duke, lead fashion, and behave with propriety. Consequently, Audrina pursues mischief with gusto, attending scandalous parties and indulging in illicit affairs. But when an erstwhile lover threatens to ruin her reputation, Audrina has no choice but to find a respectable husband at once.
Who would guess that her search would lead her to Giles Rutherford, a blunt-spoken American on a treasure hunt of his own? When a Christmas snowstorm strands the pair at a country inn, more secrets are traded than gifts--along with kisses that require no mistletoe--and Audrina discovers even proper gentlemen have their wicked side. . .


Rarely have I read a blurb that is as misleading as this one, as it promises a fun book with a feisty heroine, and does not deliver it at all. I have to admit, I am fast falling out of love with Theresa Romain. I loved her first three books, her original stories and especially her heroines. I did not really like her second series, so I was having high hopes for this fourth book in her first series, as it does feature some of the previous characters. But alas.

I thought Audrina a sad girl, who did things in the hope of getting noticed by her parents, of having someone care enough for her to step in when she was being stupid. She did not have an affair because she was in love, or in lust, but for all the wrong reasons. She did not show much backbone after the first chapter either, and had no clue what she wants.
I also never got interested in the hero, Giles. He is accompanying his father, to keep him from getting into trouble and squandering money they can't afford on his dream of opening a jeweller's shop once he finds some jewellery his late wife apparently hid in a Japanese box. Giles doesn't want to design jewellery, he wants to be an architect. And he is afraid he has inherited his mother's rheumatism as his hands and wrists often pain him severely. He is certain he cannot offer a future to a lady, and although he is attracted to Lady Audrina, she is too much above his station in life.

So thrown together in an inn, and later a castle where the first box is found, they spend time together and start talking. But still, there is no fire, no passion, no ideas. I found them lacklustre and clueless about what they want in life, and with no intention to go after it.

Should I like this story, as the author has put some drama in the inhabitants of the castle they are staying? The old lady with the Alzheimer, their widowed daughter-in-law, who is secretly gay and is hiding her self in her study of astronomy?

There is just no joy in this book, not much humor. Perhaps the redeeming factor is the second romance, between Giles' father and the old Lady Irving. Now there is a character.

I really do prefer my characters to be bolder, outspoken, to know what they want and be sure of themselves. It really doesn't have to be the usual rake and bluestocking or tomboy, but these characters I just could not feel for. They felt as victims of their circumstances and did not rise above it. Even the last chapter could not make up for this book.