Delilah Marvelle – Forever and a Day 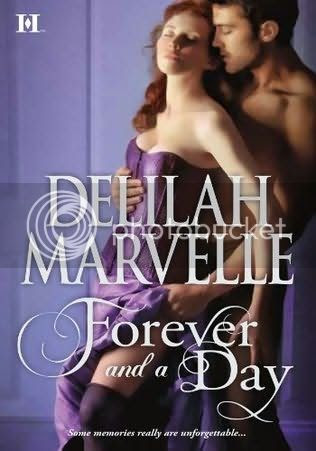 Roderick Gideon Tremayne, the recently appointed Duke of Wentworth, never expected to find himself in New York City, tracking down a mysterious map important to his late mother. And he certainly never expected to be injured, only to wake up with no memory of who he is. But when he sees the fiery-haired beauty who's taken it upon herself to rescue him, suddenly his memory is the last thing on his mind.
Georgia Milton, the young head of New York's notorious Forty Thieves, feels responsible for the man who was trying to save her bag from a thief. But she's not prepared for the fierce passion he ignites within her. When his memory begins to return, her whole world is threatened, and Roderick must choose between the life he forgot and the life he never knew existed…


Wow, that blurb sure is wrong. Roderick is NOT the Duke of Wentworth, but his second son, and since his brother died, the heir. And Georgia is really not the head of the famous Forty Thieves. She just was married to the former leader for a short time. The mysterious map? Only mentioned, and you read nothing about it being pursued or followed or whatever. I am glad I did not read it before reading the book.

This book takes place in New York, 1830.
Delilah Marvelle has been on my wishlist for a while now, and as she is one of the authors coming to Berlin for LLC 2013, that was the perfect excuse to buy some of her books, and start reading.

Georgia Milton is on her way home, when a richly dressed English Gentleman stops her, flirts with her, and asks her out for a cup of coffee in his hotel. Georgia refuses, she is not that poor that she has to sell her body. And she knows what that invitation will lead to. But the gentleman pursuing her, doesn’t want to give up that easily. Something about her captivates him. While talking together on the sidewalk, a young street urchin steals Georgia’s purse, and she goes after the thief. But so does the gentleman, and she soon looses sight of the both of them. Ten some commotion ahead spurs her one, and she sees the gentleman lying on the street, his head bloodied. Apparently he was run over by one of the omnibuses. Georgia feels responsible for this, and makes sure he gets to the hospital.
When the gentleman awakes, he thinks himself to be Robinson Crusoe, but the docter knows better. Why would he think himself a character from a book? As he never told his name to Georgia, she can’t help him with that, but the doctor will place an add in the paper, if someone knows this gentleman. But he cannot stay in the hospital any longer, and Georgia should take him home with her. Which is not something she longs to do. She has only a very small apartment, and not in the best of neighbourhoods. While she herself is under protection of the Forty Thieves, he will not. And his clothes will be stolen from his back if she lets him wander the streets of New York on his own. His coat even has real silver buttons!
So she ruins his clothes, and snips off the buttons. Those will be worth at least four dollars! A fortune.

Georgia is the widow of Matthew, former leader of the Forty Thieves. A bunch of men who steal supplies to be able to get an education. Which is important if they ever want to leave the slums and have a better life. Her husband had a son from a previous marriage, who is Georgia’s age, and now one of the currant leaders of the gang. He is not happy that she has taken a man home with him, and more than ready to kill the bloke. But in exchange for some (a lot of) money, he will extend his protection to Robinson. Georgia has no idea how to help him get his memory back, but lying to him like the doctor wanted is not something she wants to do. She is a washerwoman, washing the clothes of some of the monks of the nearby abby. A job that makes her just enough money to pay the rent, eat just enough food, and safe a little to pursue her dream: to move West, and buy a plot of land for herself. Leave this filthy city for the open air, and a small logcabin with a garden. Just like her friend did some years ago. And now, helping Robinson will make sure she has enough money to actually do it, she only needs a few dollars more.

Living in those close quarters is not easy, as they are both determined not to sleep together. The attraction between them sure is there. Robinson wants to help Georgia with her daily chores, but his delicate aristocratic hands sure are not used to that. When finally Robinson is found by his father, how can he leave Georgia behind? He has fallen in love with her. But he also knows she can never belong in his world, the ton would only laugh at her.


The story was entertaining, I did like Georgia a lot. She is resilient, she knows what she wants and goes after it. I did not like Robinson / Roderick very much though. Especially after he gets his memory back. A lot of things were only hinted at in this book, and I sure would have liked to know more. The second part of the book is a flashback at what previous happened in his life, and how he and his father came to be in New York. But nothing at all about what they did there, and how they accomplished their mission.
There are intriguing things happening, which I hope are explained in the next book, as there is nothing at all revealed in this one. I do hope it is more than just a tease.

All in all, I did enjoy reading this book, but a lot of things could have used some more pagetime instead of being hinted at. A nice book, but certainly not a great read.