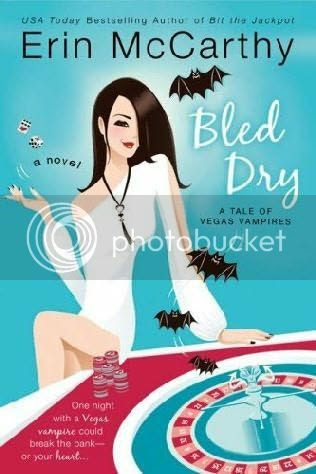 Hooking up with a vampire has its risks-but getting pregnant usually isn't one of them. Tell that to Brittany Baldizzi, who finds herself in the family way with no father in sight. After their one night of passion, vampire Corbin Jean Michel disappeared off the face of the earth-or at least off the Vegas strip.
Corbin is a vampire with a cause, secretly trying to find a cure for his condition. But when he finds out Brittany is pregnant with his child, Corbin can't keep his paternal instincts from trumping his bloodsucking ones. Even when showing his hand could cost him the woman he can't help but love.


In the very first book of this series, Brittany, Alexis’ little sister, was attracted to a lonely French vampire, and they spend a few minutes in her bed together. What Brittany did not count on, was getting pregnant from that one time of making love. Even though it was the best time in her life, she loved it when he bit her all over. But she hated it that she never saw him again after that night. She wants Corbin to be a part of their child’s live, so when her sister tells him that Corbin never left Las Vegas, and is staying right here in the Ava hotel and casino, she is determined to tell him.
Corbin is playing physician and jailer to Ringo, the assassin that Donatelli got hooked on drugged blood. Trying to teach him the rules of the vampire world, and get him clean. But when Ringo hears them talk, he knows this information is worth some serious money to Donatelli. Corbin doesn’t really like this job, he is working on a vaccine to cure vampirism, and he is very close to the solution. He was turned against his will, and he knows more vampires want to be mortal again.
As Brittany is half vampire, called an Impure, their child will be three quarters vampire, something that has not happened before in vampire history. Corbin does his best to reassure Brittany about their child, not telling her what he suspects: their child will be immortal, but not need to feed on blood, or have any of the other weaknesses of a vampire. People will want to experiment on him/her, reproduce it if possible. They have to keep this a secret, and keep them safe. And even though Corbin wants to do the honourable thing, and marry Brittany, he will have to keep his distance so no one will figure out that he is the father instead of some mortal. Which hurts Brittany, as she needs him in her life and wants to share it with him. But she won’t marry him for those reasons! And that is very hard to understand for an 18th century French aristocratic vampire. As is going to Daddy school, to learn how to be a father …
Of course, evil doesn’t rest, and in the end there is lot of action, and some revelations I predicted to myself early on in the series. Which did not spoil my enjoyment though.


I enjoyed this third book in the series, and am looking forward to reading the fourth soon. I am not a big fan of Brittany, and if this was any other genre, she would be too stupid to live. Which is something I loathe in my heroines. She is just too naïve and trusting, even though she is really smart as well at some times. After her difficult childhood, it is hard for her to believe in marriage, and she just refuses that to Corbin. I did like her for that. Don’t get married for the wrong reasons. I also liked the parts where Brittany and Corbin were together, trying to get used to being parents, going to baby stores and such. As I usually really don’t like reading about pregnant heroines, and everything do to with babies, I have to stay that Erin McCarthy really did do a great job, of keeping me reading this story, instead of skipping it for the next one.

Again, a well written, fast paced and fun book to read. I like my vampires to be rich and handsome and not evil, and that is what I get in this series. The great setting of Las Vegas ads glitter and glamour, and is of course a great cover for them. One day I will visit this city.

Full review on my blog, www.boeklogboek.blogspot.com