A novel, published May 29, 2012.
Genre: science fiction with a dash of romance and lots of action
Cover: the crew, I like it. 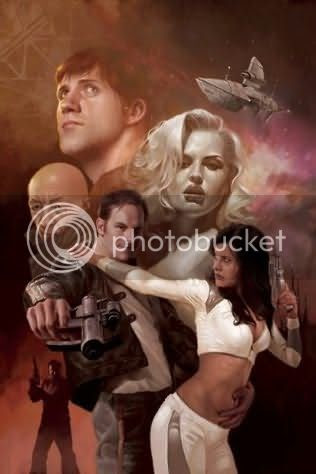 Captain Alexander Outland of the Sixty-Nine (short for Space Vessel 3369, of course) is the best pilot in the galaxy. He's also a pirate, a smuggler, and loved and loathed by women in umpteen solar systems. His crew of strays and misfits includes an engineer of dubious sanity, a deposed planetary governor, an annoyingly unflappable Sexbot copilot, and a Slinky weapons chief who stubbornly refuses to give the captain a tumble.
Outland just wants to make a decent living skirting the law, but when an invisible space armada starts cutting into his business, he soon finds himself in hot water with the military, the mob, mad bombers, and an extended family of would-be conquerors. And that's not counting an occasionally telepathic spy . . . .
Like any sensible scoundrel, he hates heroics. They're risky and they don't pay well. But to keep his ship and crew in one piece, and make time with a certain hard-to-get weapons chief, he might just have to make an exception-and save the galaxy in spite of himself!


Captain Alexander Outland, Nap to his friends, is the best pilot in the galaxy. He is also some kind of pirate, smuggler, and a big womanizer. He just loves them all. And that is the part that gets him into trouble time and again. If only Slinky, his gorgeous weapons officer, would give him the time of day, he would gladly give them all up for her. But of course, she doesn’t believe he will change his ways for her.
While on a legitimate mission to obtain a shipload of magma, they have to flee the planet they have chosen before they have even landed there, due to Nap’s previous romantic interludes. And so they have to detour to the planet Herion, which is under military rule. But before they reach Herion, they land in the middle of an invisible pirate army, bent on capturing them and their ship. It takes all Nap’s considerable skills to escape them in one piece. Things have changed on Herion since their last visit there: they are the second ship to have landed in 6 months. The economy is almost in ruin, and the rules have become even more strict.

Governor Murgat remembers something similar happening over 30 years ago, when Pierre de Chance and the Chatouilleux Français Armada were controlling the Delta Quadrant. Nap cannot believe how anyone can be scared of someone called Lucky Pierre and the French Tickler Armada though, but they were very powerful, until they were stopped by Janz the Butcher.

So, what is next for our crew? They have landed safely on Herion, but how are they to escape again, and not end up as pirate bounty? The Herion army cannot offer them protection, and the Herion Business Bureau is offering them a lot of money to get caught, and destroy the pirates from within, while a third party wants to destroy their ship and keep them stranded on Herion.

A spy from Slinkie’s homeworld seems to be their only ally, but will Nap take him with them? And what about Major Bryant Lionside, who sure seems to have his eye on Slinky. Is he their enemy, or just fighting to survive himself. Nigel Nitin is more than he seems, and wants to kill them all, to get away with Audrey. And when the biggest refuse waste plant explodes, this will sure be a very smelly escape.


I really enjoyed this book, even though it took me a while to get into it. A man calling himself The Outland, is not my kind of hero. But Nap soon changed my mind about him, and I very much enjoyed this fun and fastpaced book. Gini Koch sure has a lot of imagination, and I am extremely happy that a book doesn’t have smell in it. Some of those details were a bit too gross for my taste and I do think this is a book that will appeal to guys as well. The complots that are revealed in the end remind me of the Alien series, layers upon layers of intrigue. All things I can never predict or foresee.

This mismatch of characters made for a great crew, together they can handle everything. I do hope there will be a second book, as I want to know what will happen with Slinky now her identity is known. And of course the new additions to the crew need some of their own adventures.