The fifth book in the Highland Pleasures series, published December 31, 2012.
Genre: historical romance
Cover: hot man in kilt, what is not to love? 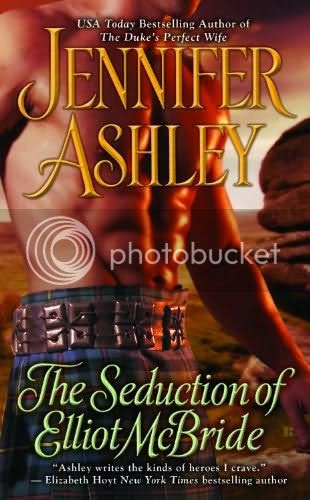 PROPERLY IMPROPER...AND DARING TO LOVE...
Juliana St. John was raised to be very proper. After a long engagement, her wedding day dawns - only for Juliana to find herself jilted at the altar.
Fleeing the mocking crowd, she stumbles upon Elliot McBride, the tall, passionate Scot who was her first love. His teasing manner gives her an idea, and she asks Elliot to save her from an uncertain future - by marrying her...
After escaping brutal imprisonment, Elliot has returned to Scotland a vastly wealthy yet tormented man. Now Juliana has her hands full restoring his half-ruined manor in the Scottish Highlands and trying to repair the broken heart of the man some call irredeemably mad. Though beautiful and spirited, Juliana wonders if that will be enough to win a second chance at love.


This book starts with a wedding, not the more regular meeting, courting, falling in love story. I liked it. Of course, Elliot and Juliana do know each other, and have for many years. Juliana hasn’t seen Elliot since her debut ball, when he kissed her. Convinced she will never have him for herself, she finally accepted an offer of marriage from someone else. But after a long engagement, her wedding day has arrived at last, and she is ready. When the groom doesn’t show, her family starts looking for him, only to find out the cad has married his piano teacher the day before! How could he humiliate her like that? Leaving her at the altar, not even a note?

Elliot went to India, and has only been back once, a broken and tortured man. But now he is back, and determined to marry Juliana himself. The fact that she proposes to him when her fiancée jilted her, is a big bonus. And not leaving her time to reconsider, he takes her to the waiting priest. A change of grooms is no problem at all, who cares about a possible scandal?

Elliot takes Juliana with him to his newly bought castle in Scotland. His great-uncle needed money, and Elliot needs a refuge, quiet surroundings to get his head back straight. He was tortured severely, and is still living the nightmare from time to time. The castle is a mess, with only the old laird living there, and one young man servant.
Luckily, Elliot has brought his servants from India with him, and they will help set the castle to rights. But Juliana will have to hire everyone available in the surroundings too, to help repair everything. Especially as she is determined to have a midsummer fȇte. She has to get used to the Indian food Elliots’ manservant slash cook makes for them, but she likes it.

Then Elliot becomes convinced that a former friend from India, whom he is afraid was murdered by him, is haunting him here. Will Juliana believe in him, or will she be afraid that the madness has overtaken him completely?


What can I say about this new Jennifer Ashley book? You all know she is one of my favourite authors, doesn’t matter which genre she writes in. So I knew I had a great book in my hands, the moment I picked it up. And I was not disappointed.
It did take me a while to get used to Elliot, who is a very different hero from what I am used. He does seem to live in his own world, and he really does live in a nightmare sometimes, disappearing for a long time, hiding from his captors, or sleeping like in a coma. He is very autocratic, doesn’t discuss things at all. But he clearly does love Juliana, and does everything for her that he can. She was the one thing that kept him sane. But I grew to like Elliot a lot, the more sane he became. He is a hunter, a man of action, who doesn’t mind to work with his own hands instead of having servants do what needs to be done. He is a real Scot, in a kilt. With nothing underneath …

And Juliana. 30 years old, jilted at the alter, her whole future in pieces. Until she finds Elliot and proposes to him, her life long dream. She fell in love with him as a little girl, when he kissed her cheek while putting a frog in her pinafore. She has taken care of her father’s household since she was 11 or so, as her mother was worthless in that regard. She is great at organizing things, making lists. But Elliot makes her enjoy her life as well, taking her away form her lists, her planning. I liked that.

An original story, with a bit of a suspense plot. A meeting with previous characters, and a lovely couple. There was a very nice scene with Ian and Elliot. I am very much looking forward to catching up with them in the next book(s). If you still have not read a Jennifer Ashley book, even after all my recommendations, what are you waiting for? Shall I just send you one to try?