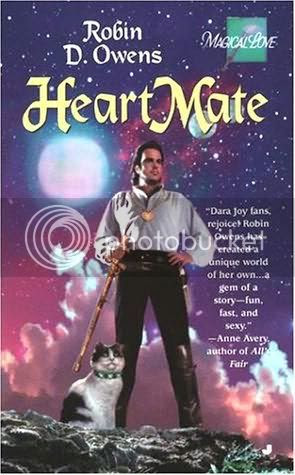 “Today you will meet your HeartMate”. Rand T’Ash’s blood thrummed in his temples as he stared at his Divination Dice…
All his life, Rand T’Ash has looked forward to meeting his HeartMate, with whom he could begin a family. Once a street tough but now a respected nobleman and artisan, he has crafted the perfect HeartGift, which, in the custom of the psychically-gifted population of the planet Celta, is the way a man finds – and attracts – his wife…
Danith Mallow is irresistibly drawn to the magnificent necklace on display in T’Ash’s shop, but she is wary of its creator, despite an overpowering attraction. In a world where everyone is defined by their psychic ability, Danith has little, and thus is at the opposite end of the social spectrum from T’Ash. But T’Ash refuses to accept her rejection, and sees it as a challenge instead. They are HeartMates, but can T’Ash persuade his beloved to accept her destiny by his side?


After losing his parents, his family, and his inheritance at age 6, Rand T’Ash has been lonely his whole life. Escaping the men who murdered his family, he fled into Downwind, and survived. Grown up, he has taken his revenge on the men responsible, and taken up his position as a High Lord again. But he never regained the polish most nobles have effortlessly. He doesn’t know how to behave courtly, and he certainly has no idea how to woo a woman. Let alone the woman destined to be his HeartMate. But destined to be doesn’t mean she has no choice in the matter. She can still refuse him.
Danith grew up in an orphanage, and except from having a large family of her own, all she wanted was to have powerful Flair, but the testing stones never revealed anything. And now this High Lord, this jeweller is pursuing her. Sending her flowers, and jewellery. Well, she will not become his mistress! She has a paramour she is intending to marry already. The brother of her best friend, and he has a family that already loves her. But T’Ash is determined.
He is not allowed to tell her they are HeartMates, or that the necklace she so admires but stubbornly refuses to touch is a HeartGift only she can see and feel. And when it is stolen, he is furious. When his only friend, Holm Holly, is demanding his help in crafting an enchanted blade for his younger brother, calling in a debt of honor, T’Ash has no choice. He cannot go after his mate, nor the stolen necklace. Designing and crafting the blade will cost a lot of time and Flair, and will exhaust him. But he accepts the obligation, and in the meanwhile, a Hunter will track down the thief, who is a Null, and his Familiar, a large and ugly Cat, will track down his HeartMate. He doesn’t even know her name!
But nothing in life has gone easy for T’Ash, and the claiming of his HeartMate is no different. Danith keeps refusing him and his gifts, she wants nothing to do with him. The horror of becoming a GreatLady with all the obligations that entitles, boggles her mind. She has grown accustomed to her own freedom in the past years, to her own Flair-less friends, she doesn’t want to lose that.

But unrest is thrumming through Downwind, and street gangs are causing trouble. Young noble boys and street boys fighting, and when Danith is thrown in the middle of it, T’Ash has no choice but to rescue her. He is afraid of her seeing his troubled past, the darkness inside of him, but he will kill to keep her safe, and he will die to keep her safe. The only thing she wants, he can’t give her. The memories of his past. T’Ash keeps thinking that if only she accepts the HeartMateBond between them, all will be well. He just can’t say the words that he loves her, that she is everything he wants, and needs. And Danith doesn’t want to say the words until he has opened up to her, let her in. In spite of her struggles, she has fallen in love with him. But he also revealed her own powerful Flair, she is an animal healer, a power though lost, and so she rises from a commoner into the nobility overnight. A whole new life awaits her. So why does she need him anymore?


Be warned: gushing review follows.
I loved this book very very much. It reminds me a lot of Jayne Castle’s books of the planet Harmony, which I love. Of course there are differences, but also a lot of similarities. Magical abilities, animals who bond with their humans (though nothing can beat Dustbunny’s!)
But the writing style is different, and of course the worldbuilding. There are social castes, determined by the Old Families who came on the original spaceships, and new Houses based on magical power (Flair). The leading male of a House gets the T’ before the last name, and his lady wife D’. They are still busy settling the planet, honouring some old Earth customs, and adapting the animals and plants they brought with them. Some species really prosper, while others are almost extinct.

I loved T’Ash from the first page. A large dark powerful man, who felt deeply, but couldn’t express that. Guarded and alone, safe for his Fam Zanth. And that Fam certainly is a character on itself. Large, demanding, understanding and interfering. Zanth appeared in the box he was sleeping in one night, almost as big as T’Ash himself, and they have been together ever since. Fighting, surviving together. So of course T’Ash gives him everything he wants, jewellery to play with or give away, and the both of them are extremely fond of chocolate mousse …

And then Danith. She wants a family, she wants to be loved, but in a quiet manner. And the HeartMate thing sure is not a sedate love, but a blazing fire. Bonding with T’Ash would mean a public life, with all the obligations to fulfil. No more quiet private ceremonies, but big ones with all the other First Families in the Church. She certainly doesn’t want to loose her friends. She has a really hard time accepting that T’Ash really wants her, that he believes in them being HeartMates. But she loves Zanth, and when she finds out she is a powerful Flair as well, when T’Ash stirs her own powers alive, her life has already irrevocably changed. So now she has to choose.

A lot of the story is dedicated to T’Ash “courtship” of Danith, but there are also some battles, and interactions with other nobles. Both have not had an easy live, but together they are great.

When I am not feeling well, I allow myself to reread my favourite books and series. And I have to say, reading this for the second time, it is still a great story. I loved it all over again, and got myself lost in the world of Celta. I do recommend it.