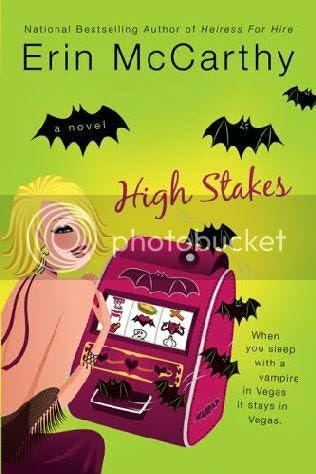 From the USA Today bestselling author, a vampire-meets-girl story set in the city that never sleeps-except during daylight.
He's a bloodsucking freak of nature. But, unlike other politicians, Ethan Carrick is actually a nice guy. Not to mention a very hot, wealthy, casino-owning vampire. It's an election year for vampires, which means he'll first have to escape his opponent's hit men. Then he'll have to find a suitable First Lady, preferably here in Vegas.
Brittany Baldizzi fits the bill. She's smart, pretty- and sweeter than a glass of diabetic O-Negative. But her protective sister Alexis steps in with a message for Ethan: Bite me. It's then that he realizes it's the sexy, no-nonsense Alexis who raises his stake. And as much as she denies it, Alexis wouldn't mind a romp in the coffin with him. But can a mere mortal, even one who risks her life for him, make a centuries-old, womanizing vampire feel something entirely new?


As Erin McCarthy is one of the authors who will be attending the LLC2013 in Berlin this year, it was high time for me to tackle the stack of books I have by her. I liked this cover, and as it is the first in a series, I decided to start with this one.


When her sister suddenly moves into one of the big casino’s on the strip, and abandons her flourishing dental practice, assistant district attorney Alexis is worried about her. Determined to get her sister out of the clutches of the slimebag who is keeping her, she enters Ethan Carrick’s meeting unannounced. Her little sister is gorgeous, but not always bright when it comes to men, and it is up to Alexis to rescue her from herself. Brittany should marry an accountant and settle down, not become a rich man’s newest plaything!
But Brittany doesn’t want to go home, she has discovered that Ethan and his people are vampires, and she wants to save them.

Ethan was planning on making Brittany his wife. He is the currant vampire president, and is running a campaign to be re-elected for the next 40 years. Brittany is an Impure (half vampire, half human), and as such, would be politically talking, perfect as his wife. But even though she is gorgeous, she is not doing anything for him, which is why he hasn’t slept with her yet. But her sister, now she is something else. She tries to kick the hell out of him, to make him back off. And so he makes a bargain with her: if she plays his platonic girlfriend for a week, he will send Brittany home. Alexis is certain she can withstand his amazing looks and physique, and she wants Brittany out of here. So on her own terms, she accepts. And that Brittany thinks they are all vampires, that is just a bunch of nonsense, and makes them geeky roleplayers. But Ethan is determined to woo Alexis, she must be his one true mate, as he cannot hear her thoughts at all. Brittany is an open book for him, but Alexis is shielded tight.

When Ethan is shot in the heart though, and she fears for his life, Alexis finds out differently when Ethan heals before her eyes. Can she deal with all this?


I enjoyed this book, it is light and humorous, and I loved the kick ass Alexis. She has a black belt, and loves practicing her moves on Ethan. Who at first tries to be noble, but when she keeps coming at him, seriously has to defend himself. Alexis and Brittany had a lousy childhood, with a mother who is a stripper, and keeps searching for a man. Alexis was the one who raised Brittany, and has always been protective of her. She is though, has serious commitment problems, and doesn’t think she will ever marry. The fact that Ethan is seriously interested in her is a miracle. She is not tall and willowy, but short and curvy. Yes, low self esteem in the looks department here.
And then there is Ethan, 900 years old, and falling in love for the first time. Of course he has trouble adjusting to that state, and being patient. Waiting for Alexis to make up her mind, and choose for a relationship with him for real, instead of the one week deal. I liked him, he really wants to be a good president.

There is a bad guy, who also wants to be president, to control the vampire world, and make them public so they can rule humanity. A campaign manager who is very stuffy. A human assassin who can’t understand why Ethan is still alive, and the young female vampire he fell for. A second storyline with Brittany and the French vampire she likes. I do think that his one will play out in the second book in the series, keep a watch out for the review of it.

All in all, it was fun, never really predictable and still full of action, and of course, hot vampire love scenes. If you are in the mood for something light and funny, I do recommend this series. I really enjoyed this book.

p.s. Stay tuned for an interview with Erin McCarthy soon, as she is coming to LLC Berlin 2013!