The first book in the Vintage Kitchen Mystery series, published May 1, 2012.
Genre: cozy mystery
Cover: like it 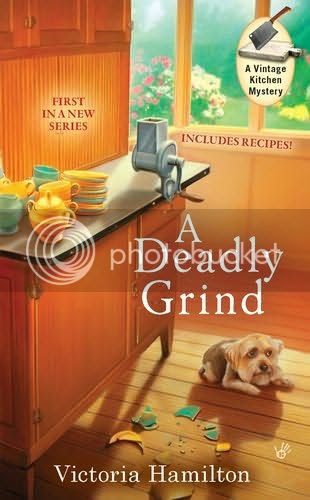 A Hoosier to die for?
When vintage cookware and cookbook collector Jaymie Leighton spies an original 1920s Hoosier brand kitchen cabinet at an estate auction, it's love at first sight. Despite the protests of her sister that the 19th-century yellow-brick house they share in Michigan is already too cluttered with Jaymie's 'junk,' she successfully outbids the other buyers and triumphantly takes home her Hoosier.
But that night on the summer porch where they've left the Hoosier to be cleaned up, a man is murdered, struck on the head with the steel meat grinder that is part of the cabinet. Who is this stranger - and what was he doing on their porch? Does his death have anything to do with the Hoosier?
As the police struggle to determine the man's identity, Jaymie can't help doing a little digging on her own, accompanied by her three-legged Yorkie Poo, Hopalong. But in her bid to uncover the truth about the hidden secrets of the Hoosier, Jaymie may be the one who ends up going, going... gone.


Jaymie and Becca Leighton are at an estate auction, to score some goodies. Becca is after old porcelain and such, for her online business. When you have a precious set of china, and you break one item, she will get it for you, so your set is whole again. At a price of course.
Jaymie just has a passion for vintage cookery things. She has been writing a cookbook with vintage recipes, using all the original utensils, but updating them for modern use.
And now she has fallen in love with an original Hoosier, a cabinet from the 1920’s with all kinds of authentic appliances still inside. Her sister hates the ugly thing, and doesn’t want Jaymie to buy it, but Jaymie is determined. She will make room in the kitchen for it, after all, she is living in their house, and her sister doesn’t.
Pre-auction Jaymie hears some strangers talking about a very valuable button, they want to find and are sure is hidden in one of the items on auction. She didn’t know button’s could be worth so much money, but she is not interested in those. Still, she does buy a basket full of sewing items and pieces of ribbon and lace. Some old crockery, and the Hoosier, though the bidding on that one is fast! Only because some of the bidders get distracted by a fight, she gets the piece. And Becca gets the china she is after, and some spare teacups and saucers for the upcoming “tea with the Queen” event in the town the next weekend.
But getting that Hoosier home is not that easy. It is huge, and heavy. Some muscled men do help them get it in Jaymie’s ancient van, but back home they won’t be able to handle it on their own. Luckily, one of the guests at the Inn next door is willing to give them a hand, to get it on the summer porch. Jaymie really needs to clean it top to bottom first, before she gets it into her kitchen.

But that night, there is a ruckus outside the house, and Jaymie and Becca (who staid the night) find a dead body on the summer porch. The door is broken open, and the boxes of stuff Jaymie bought at the auction are strewn around. What have they been looking for? And who is the dead man on her porch? She has never seen him before. How are they going to clean this mess up, when the police has taken away the body and the possible murder weapon? The meat grinder that is part of the Hoosier, and which Jaymie attached loosely to the workspace the evening before. Will she ever be able to use that, if it has been used to kill?

Luckily, Jaymie’s best friend DeeDee has come over to help clean up all the blood and other stuff. She is a surgery nurse, and knows how to get rid of the biowaste as well. Jaymie is cleaning all the fingerprint powder of the porch and the furniture stashed there, trying to salvage some of the items strewn around. She hasn’t got a clue why this has happened, while the house next door is sitting there empty most of the year, filled with priceless antiques. Why her house? But Jaymie has not time to sit at home and brood, she needs to help her next door neighbour in the Inn to make breakfast, and make other decisions. She dearly loves her, but the woman is clearly in over her head, and incapable of making decisions concerning the inn on her own.
And after that, she needs to get into town, to help with the last details of the “tea with the Queen” set up. Why has no one told her, that her ex-boyfriends new girlfriend is a part of it as well? And as the Princess no less, while Jaymie is just one of the serving girls? Do they really think she is still pining away for the guy?


I enjoyed this cozy mystery a lot. I loved all the details concerning the Hoosier and why it is so special. I am not much of a cook myself, and never use a cookbook. But I liked Jaymie and how she collects them, and old stuff. She also has a three legged little dog, and a rescued scaredy cat. I enjoyed her interaction with them both as well. Becca is the protective older sister, who still tries to bully her sister, as she knows best. Which she doesn’t. But they do love each other, and both have their tasks in the family. Jaymie has very interesting friends, old people and young people, and they all add to the story.
Then there is the possible love interest, and how Jaymie finally realises what a class A jerk her ex boyfriend is, and that she did not really love him all that much after all. I did not guess at the mystery at all, perhaps for an American reader the word “button” will ring some other bells than it did for me. But I enjoyed it, and have pre-ordered the next books in the series already.

Jaymie is a reader as well as a baker, and her favourite books are historical romances by Mary Balogh, which are mentioned a few times. I like that, especially as I have lots of books by Mary Balogh as well. I also found out that Victoria Hamilton has written historical romances under other names, and am determined to get my hands on some of those as well. I enjoy her writing style and sense of humor. The characters all have dept, and it doesn’t take many words to describe them and make me like them.

I’ve won this book over on Killer Characters blog, and if you like reading cozy mysteries, you really should follow that one. The characters talk over there :) and those posts are really funny, and give you a feel for the authors’ writingstyle.