Kate Collins – Snipped in the Bud 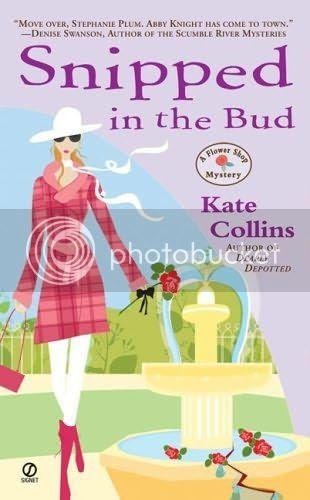 When I swapped the thorny problems of law school for the budding business of my flower shop, Bloomers, I vowed that I, Abby Knight, wouldn’t be caught dead visiting that hateful campus ever again. But sometimes a girl’s got to face down her dragons…
Plant of Attack.
Someone orders a black rose for Abby’s old law school nemesis, Professor “Snapdragon” Puffer. But her plans for a speedy delivery are foiled when he catches her putting the bloom on his desk and sends it straight into the trash. Abby flees in terror, only to run smack into Carson Reed, the professor who recently had her arrested at an animal rights protest. After a biting exchange, Abby storms out of the building. But if there’s anything she can’t stand, it’s injustice and bullies. So, even though she knows bad luck comes in threes, she ignores the advice of her sometimes boyfriend, hunk-a-licious Marco Salvare, and heads back in to retrieve her dignity and her flower – only to find the rose now decorating a dead professor, and herself the prime suspect…


When Abby is to deliver a rose to her law school nemesis, the professor who loathed her on sight, keeps calling her Betty Boop, and even threw his famous silver pencil at her, leaving a scar, she leaves with weak knees. Almost running over said professor in the parking lot does not do a lot of good to her nerves either. But when he catches her in his office, delivering the flower (one of her best deep purple –neer black- roses in a very pretty vase) he refuses to pay for the order, and throws the flower in the trashcan. Abby flees his office, and runs into another professor she despises. Carson Reed works as a legal advisor for Dermacol, a factory that uses live test animals to test make up and other beauty products in a very brutal way. And we are not talking rats and mice, but cats and dogs and bunnies and monkeys. Abby was part of a protest a few weeks ago, and Carson Reed had her arrested. A big picture of her being led away in handcuffs graced the frontpage of the local newspaper.
Back in her car, she needs to compose herself before she drives back to Bloomers. But suddenly angry at herself for being such a coward, she is determined to go back inside and get her flower back. She calls Marco for moral support, and though the tries to talk her out of it, she just has to do it. And boy, does she wish she had not! What she finds in Puffer’s office is Professor Reed in Puffer’s chair, with Puffer’s famous pencil stuck in his head, dead as can be. When she screams for help, one of the students is coming from the computer lab. They call the police, but what Abby never would have thought possible, happens. She is their prime suspect! Motive, means and opportunity. She was angry, she caught him alone, and she killed him! Even her fingerprints are on the murder weapon. How is she getting out of this mess?

The local media is painting her as the murderer, a militant animal rights activist. But all that airtime sure is good for Bloomers! The shop has never been so busy in years. But Abby is hounded by journalists all the time, especially one Connor Mackay, who has written that first nasty piece about her. And because Puffer keeps pointing the finger at her. Thanks to her cousin Jillian, who is finally moving out of their apartment, Abby gets some haute couture outfits that disguise her, so she can move around town, figuring out who the real killer is. And in the mean time, find out who is petnapping beloved dogs and cats around the town.


I have to admit, Abby is growing on me. I liked how she stood up for herself, and keep arguing against Dermacol. It is very hard for her to believe she is the prime suspect in a murder case, and people have gone to prison on a lot less evidence that there is against her. There are plenty of people with a good reason to want Carson Reed dead, but how to find the right one?
The relationship between Abby and Marco is going slow and steady, and I like that. Their kisses sure steam up the room! So please, please don’t make this some corny love triangle with Connor as the third corner! I don’t want to believe that Abby is so superficial.
Less family time for Abby, and I really did not mind that. Her mother is very annoying, and she has totally no bond with her older brothers and sisters-in-law.

The mystery was good, I did not guess who the killer was for a long time. The pet mystery was easy to crack though.