The fourth book in the Celta series, published July 5, 2005.
Genre: sci-fi / fantasy romance
Cover: I think those are the marriage bracelets. 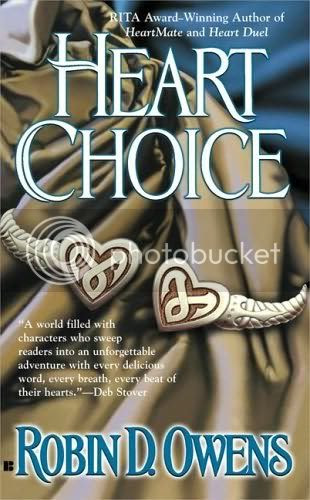 On the planet of Celta, where psychic talents thrive and desires flourish, Straif Blackthorne is the last of his kind. After his family dies due to a genetic disorder, Straif is determined to find a cure and rebuild his heritage. Nothing else matters-until he meets Mitchella Clover. But Straif cannot give Mitchella his heart, for she is unable to bear children. Only when tragedy threatens to destroy them do they realize what truly matters, and what they truly mean to each other.

After losing his whole family to a Celtan disease, Straif T’Blackthorne is the only one of his line left. He was only 17 at the time, and the only reason he survived was because he was going trough his second Passage, and his dying parents send their last strength his way. He has felt guilty all his life, and has scoured the planet for a cure. But to no avail. He has been back to Druida back from time to time, and has visited his mothers relatives, the Hollies. Both Tinne and Holm are good friends of his.
But now he has come back home to stay, and has to put the Blackthorne residence back to its former luster. He has neglected it sadly, as he just couldn’t deal with the memories. So on advice of his new FamCat Drina, he asks Mitchella Clover to re-decorate his Residence. Mitchella is very pleased with the assignment, especially because she really needs the job, and it is no-expense barred. So she and her foster son Antenn Moss will be spending a lot of time at Blackthorne Residence. Antenn has Flair for architecture, so he can certainly help out. But unfortunately, Antenn soon notices the great attraction between Mitchella en Straif, and he dislikes it. It will only get Mitchella hurt. Straif will never marry her if he finds out she is barren due to a childhood disease, and he needs to build his family back up. Besides, Straif has a HeartMate.
Straif is not really ready for all of this, the memories of his parents and his little sister are hurtful, but Mitchella expertly deals with it, redecorating the rooms so no memories linger. The House is also glad Straif is back, and is setting it to rights.

But perhaps Straif has come home to late, there is a cousin who challenges his right to be T’Blackthorne. And as a result of that challenge, Mitchella and Straif have to work around the clock to get the House back in shape, and with a minimal budget, as his family funds have been frozen until after the Councils decision. The help of a lot of other Nobles is required in a Healing Ritual for the House and Grounds, sending their Flair and goodwill. Even the very pregnant SupremeJudge Ailim Elder has come, without her husband.

And then there is someone trying to kill Mitchella. Is it the secret Blackthorne? Trying to stop the renovation? Or is it someone else altogether? Straif keeps searching for a clue to his family genetic fault, and finally he asks for help from the space ship and its Captain, Ruis Elder. But is he willing to pay the prize for the cure?

GreatLord Vinnie T’Vine becomes friends with Antenn and the other Clover boys. His guardians are raising him very strictly, but due to his great Flair he manages to escape them every now and then.

After rejecting their son Holm’s HeartMate, and disowning him, making Tinne the new HollyHeir, things are not going well for T’Holly and D’Holly. They had vowed upon their Honor to welcome their son’s HeartMate. So when they break that vow, ill health and unhappiness settles upon their House. In the meanwhile, Lark and Holm have made a new life for themselves in Gael City. But T’Holly is to stubborn to admit he was wrong, and to bring his son back into the Holly Family. His mother’s Family has “adopted” him, so his last name is now Apple. He would have preferred a more masculine name, but he can’t afford to alienate those relatives as well. But even though they live far away, he stays a good friend to Straif, like T’Ash.


I have met Mitchella Clover in the previous books, and liked her. Best friend to Danith D’Ash, I liked how she stood up for her. And now it is her own story. And I loved it.
Mitchella can’t have children and for a member of the only children rich family on Celta, that is a hard fate. She has grieved, and accepted it, and in Antenn she has found the son of her heart. They are very close. And now Straif barges into their lives. After her own house is burned to the ground, she and Antenn move into Blackthorne Residence. Which makes working there easier, but also flares the attraction between Mitchella and Straif, and Mitchella doesn’t really want to deny it. She knows it is only an affair, he will need to find his HeartMate eventually, and she accepts that. For now, she will love Straif and take whatever passion and love he can give back.
And Straif. Well. Sigh. He has been through a lot in his life, but now he wants it all. He will fight for his title, and his Family Residence. But he dreams of his own Family and children, and when he finally finds out, Mitchella can’t give them to him, he doesn’t know what to do. Yes, he wants her, but he wants his own bloodline more. Typical stubborn man, who cannot look past his own nose.
When Straif and Mitchella are together, things are great between them. They really fit. The passion between them flares, and their lovescenes are great. I loved the part where Antenn finally accepts Straif into their lives, after their adventure.

Mitchella is the strong one in this book, this relationship, and I really admire her.

The parts with all the FamAnimals are great, and Drina is such a dislikable creature. Very selfish and demanding, unlike the other kittens and cats I have met. But Straif loves the little half Siamese cat, and gives in a lot. And there is a FamFox, who attaches itself to Winterberry.

I just love this series. The writing style, the characters, the worldbuilding, the stories, everything.