The second book in the Shaede Assassin series, published July 3, 2012.
Genre: urban fantasy
Cover: strong, I like it. But Darian still does not wear leather. 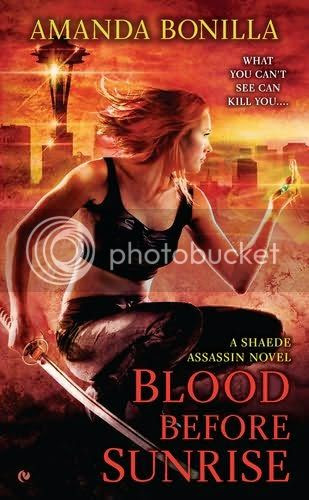 What you can't see can kill you...

For months Darian and her Shaede guardian Raif have searched for the Oracle who attempted to overthrow the Shaede Nation--and kill Darian in the bargain. But now that they've finally found the half-crazed Oracle, for their efforts they are granted a possibility too painful for Raif to imagine, and too enticing for Darian to ignore.
Darian is determined to reunite Raif and the daughter he thought was dead, but her mission quickly proves dangerous when her lover Tyler is almost killed. And when a brooding and mysterious Fae warrior offers his guidance--at an extraordinary price--Darian finds herself willing to risk everything. As her single-minded hunt turns into an obsession, and she and Tyler grow further apart, Darian finds herself caught between the man she loves like a brother, and the man whose love she can't live without...


A few months have passed since the ending of the first book, and they are still searching for the Oracle Delilah to punish her for her betrayal. Ryder and Darian are lovers now, but Ryder is acting more and more jealous of Raif, and protective of Darian. This is something she doesn’t need, as she can take care of herself and others perfectly well.
When they finally do find Delilah, and take her into custody, she is spouting a lot of nonsense, but she does make Darian believe that she knows where Raif’s daughter is. And Darian wants to do whatever is in her power to find Brakae, and bring them back together, even though she has been missing for 300 years. But to be able to find her, she needs straight answers from Delilah, which is not going to happen as she is now in custody of the Fae.

One of the scariest Fae she has ever met, is willing to help her question Delilah, but only if she does something for him first. Darian really doesn’t want to do that, but sees no other option and agrees.
I cannot really tell anymore without spoiling the many twists in this story. You just have to read it yourself to find out what happens.


Like with the first book I had some trouble getting into the second story. But when the action started, I was totally sucked into the story. Ryder really go on my nerves with his jealousy, but he was being messed with, so perhaps when he is back to normal he will be more to my liking. Still, with the way this book ended? It might take a while.
I really like Raif, he and Darian are good for each other, but not in a lovers kind of way, more like brother and sister.
King Xander is still not my favourite character in this book. He keeps trying to yank Darian’s chain, and get her into his bed. And as she was in love with his son first, that is just creepy. And I am glad that Darian keeps resisting and rebutting him. He needs some disappointments I his life.
I liked the flashbacks to Darian’s life with Azriel, and I think it is the creepy setup for the next book.

I do agree with Darian though, why can’t they just tell her things instead of being angry with her when she has no clue. It would make her much more efficient. It is not like she doesn’t want to do the right thing.

All in all, this is a delightful, action packed urban fantasy series. Very original, and I love the many unique paranormal creatures we encounter. Amanda Bonilla writes fluently and vividly, and I like her sense of humor. With Darian she has created a kick ass heroine, who can also be kind of naïve and young even though she is a century old. Her heart rules her actions.