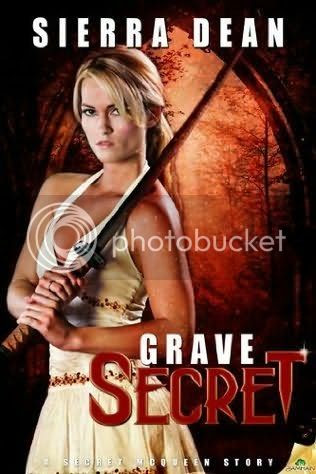 Sometimes a secret goes to the grave. Sometimes Secret puts you there.
It's been a hell of a year for Secret McQueen, and the last thing in the world she wants is to get caught up in werewolf drama. But when her former fiancé Lucas Rain shows up asking for her help, she knows there's no easy way out.
After making it known she wants nothing to do with him, Secret agrees to help find Lucas's wayward sister Kellen. After all, how much trouble could one socialite get into in the city that never sleeps?
Unless that socialite has been spirited away by fairies.
Trying to track down a missing girl in an alternate reality is just the start of Secret's problems, though. Someone appears to be killing teenagers, and the MO looks eerily similar to something for which the half-fairy oracle, Calliope, might be responsible. Throw in a rogue wolf pack claiming allegiance to Secret's mother, Mercy, and she'll have miles to go before she rests.

Warning: This book contains a promise fulfilled, sex that's out of this world, and more heartache than one hybrid assassin can handle.


Secret is still heartbroken about losing Desmond. She doesn’t care about Lucas anymore, and really hates him now. He stood her up at the altar, humiliated her in front of the world. She knows he doesn’t love her, even though they have a soul bond, she is just a convenience for him. And he clearly hasn’t learned anything yet. So why has he come looking for her, just as she is asleep in Holden’s arms, in Holden’s apartment? He looks like hell.
Lucas’s sister is missing, and that is not something new, but Kellen usually does answer her phone when Lucas is the one calling. He wants Secret to find Kellen, and gives her till the end of the week. Or he will have Desmond transferred way out of state…
Of course Secret does not react well to threats, and it is also the final thing that makes her seek out Desmond again. She misses him so much. But he just can’t live with her, smelling Lucas on her skin all the time. The solution is simple though: replace Lucas’ scent with his own…
He will help Secret find Kellen, and knows just the person to ask. When a close friend tells them, she left Kellen behind in some secret club, they find a Fae club. And when you have a debt to a Fae, you will pay the price, in full. Some Fae took Kellen with him back to Faery, and to rescue her, Holden, Desmond and Secret will have to follow her. The only way to get there, is to ask the Oracle to open the portal for them. Calliope is not happy to do so, she can’t see the outcome of this adventure, only that it is bad for Secret. Also, her realm is forbidden for werewolves, and she is not happy that Secret is bending that rule. It will be close to impossible for Desmond to keep his humanity once he enters Faery. And she warns them of her brother, the King.

Stubborn, they still set out to safe Kellen, even though it does not seem like Kellen wants to be saved. She looks happy and in love with her captor. And to fulfill her promise to Lucas, Secret has to give up something very dear to her, and she will come to regret that loss fast. At first, it seems like the solution to all her problems, but then reality intrudes, and her choices are only bad. And with the threat mommy dearest provides, she has to make amends and fast.


I really did not want this book to be finished, so I was procrastinating a lot while reading. Going to Twitter, Facebook, playing some games. But at some moment, I did finish the book. And now I am really wondering what horrors Secret will have to go through in the next one. The mayhem in this one sure broke her heart, and mine with it.
To find out about her PI partner Keaty, he was so glad about the change, and that hurt a lot. I am happy though that she is together again with Desmond and that Lucas (the werewolf King) seems to have left her life. Still, I was having hopes for her hooking up with the vampires more. But Desmond seems to have found more of a backbone in this story, and I liked him a lot more.
Secret had to made some very hard decisions, and I admire her for that, but also cried for her a lot. Sierra Dean sure is hard for her characters. The Fae angle was a nice twist to the story, and I can’t wait for the next book in this series.

Sierra Dean is one of my favourite authors, her writing style is exactly how I like it. The plot is surprising, the dialogues often sarcastic, the characters become your friends (or those you hate intensely) and the books have a really good and original story line. Hmm I wonder who will become King when Lucas gets finally killed by Secret to get her divorce … (this is not a spoiler, this is me hoping that it will happen! I hate Lucas).