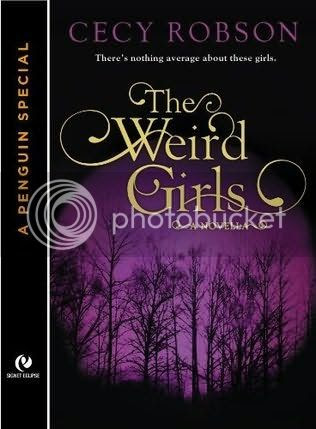 Celia Wird and her three sisters are just like other 20-something girls - with one tiny exception: they're products of a backfired curse that has given each of them unique powers that make them, well, a little weird...

The Wird sisters are different from every race on earth - human and supernatural. When human society is no longer an option for them, they move in among the resident vampires, werebeasts, and witches of the Lake Tahoe region. Could this be the true home they've longed for? Um, not quite. After the sisters accidentally strip a witch of her powers in a bar brawl, they soon realize the mistake will cost them. Because to take on a witch means to take on her coven. And losing the battle isn't an option.

Includes a preview of the first full-length novel in the Weird Girls series, Sealed with a Curse - as well as introductions to the Weird World, and a letter from the author.


I loved the first book in this series, and Cecy Robson was so kind as to send me this novella. When I finished it, I posted this on her Facebook page: “Wow Cecy, I just finished The Weird Girls novella, and it is absolutely amazing. My muscles are cramped as if I was fighting alongside Celia. You are an awesome author, and I am looking forward to being your lifelong fan.” I think that says enough about this novella. It absolutely engaged my emotions and my whole attention for the duration of the story.

It is a prequel to the Weird Girl series, but you really don’t need to read it before you read the first book. It does introduce you to the four sisters, and their powers, and their arrival in Lake Tahoe. While celebrating the buy of their first house, which will require lots of work, Taran manages to piss off some witches, and it is up to Celia to save them. But angering one witch, means getting the whole coven after you, and Celia will have to go through a lot of anguish to safe herself and her sisters.
The novella is very well written, and fast paced, while still making time to let the reader get to know the sisters. They are all very different, with Celia as the oldest and the strongest protecting her sisters. But fighting all four of them together, they are awesome and a force to be reckoned with. They are all very unique in their powers, and I do love that they all work as a nurse. They want to live a normal live, but people just sense there is something different about them, something weird.

I am very much looking forward to the next book, which will be published soon, and has, of course, been pre-ordered months ago.