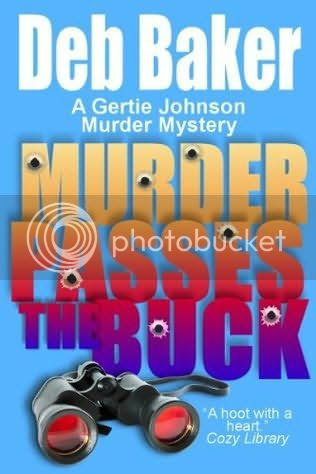 Gertie Johnson may be outspoken, distrustful of banks, and a quick draw with the pepper spray, but she hasn't lost her marbles. Her son Blaze, the sheriff in a backwoods community of Michigan's Upper Peninsula, is petitioning to become her legal guardian, but Gertie, a sassy sixty-six-year-old widow with a taste for detective work, has got bigger fish to fry: solving the murder of Chester Lampi who was shot dead in his deer blind. Blaze - who's more interested in retiring than investigating - rules Chester's death as a hunting accident. So, Gertie takes on the case with help from her friends, man-hungry Cora Mae and pin-curled Kitty. Interrogating neighbors, spying, impersonating the FBI . . . the stubborn, spunky grandmother won't give up the chase even when the killer takes aim at her.


This book was a hoot. I have never before come across a character like Gertie Johnson. She is 66, a kind of a hillbilly, and proud of it too. She knows how to shoot a gun, loves spending time alone in her deer blind, but will never shoot an animal. Not even when her grandson Littly Donny keeps missing, and she really could use some venison for her freezer.
Her son Blaze, whom she named after Clint Eastwood’s horse, is the local sheriff. But he is already looking towards his retirement and not really doing much investigating. Which leaves it up to Gertie to find her neighbours killer. Blaze keeps warning her off of his case, but Gertie can’t leave it up to him. She hasn’t watched all those CSI shows for nothing. With her friend Cora Mae, and her new bodyguard Kitty, she sets out to follow her leads, and ask questions of unsuspecting people.
But her troubles are not just about finding out who killed Chester. Her very own son is trying to get the court to make him her legal guardian. Which means he can control what she does, and especially her money. I really have no idea if he really truly believes she needs a keeper, he thinks she has changed after his father died a little over a year ago (which seems very normal to me!). Or is he just after the money she took from the bank and hid somewhere?

And no matter the unorthodox methods Gertie uses, she does find clues and stuff, and gets threatened in the process. She is blunt, but she also has a very big heart. She is not so fond of her mother in law though, and Grandma Johnson just might be her new housemate …

I enjoyed this first book in the series, it is very original, and Gertie really is something different. The setting, the language used, the characters, it was a fun read. And of course, the mystery part was very well done too. My thoughts were going in the wrong direction, especially about those mineral rights. I am looking forward to reading more books in this series.

It is still a freebie on Amazon! So go for it!