The eighth book in the Black Jewels series, published March 2010. 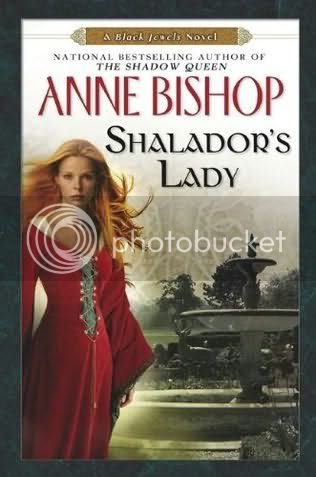 For years the Shalador people suffered the cruelties of the corrupt Queens who ruled them, forbidding their traditions, punishing those who dared show defiance, and forcing many more into hiding. And even though the refugees have found sanctuary in Dena Nahele, they have never been able to call it home.
Now that their land has been cleansed of tainted Blood, the Rose-Jeweled Queen, Lady Cassidy, knows that restoring the land will require all her heart and courage as she summons the untested power within her, a power capable of consuming her if she cannot control it.
And even if Lady Cassidy survives her trial by fire, other dangers await. For the Black Widows see within their tangled webs visions of something coming that will change the land -and Lady Cassidy - forever...


I have re-read this book again, back to back with The Shadow Queen, and again I still love it. The story and characters keep drawing me in, and I did not want the book to end. I keep hoping for a sequel.

Lady Cassidy is visiting some of her people for the first time, and she is very nervous about it. The Shalador people have had the worst of it all, and they really need her the most. Their whole culture was outlawed by the previous Queens, and they were bound to live on Reservations that kept getting smaller and smaller. But some of their Queens and Priestesses have survived in the deepest secret, and it is not easy for them to trust a new and foreign Queen. So much of the old ways have been forgotten, and Cassidy can show them what to do for the land and its people. How to use the Queens gift to make the crops grow faster and stronger and healthier. But the land is drained, and it almost takes all Cassidy has to offer before someone stops her. Cassidy really likes her time in Shalador, but the Court has to return to Grayhaven Mansion again. And there a really nasty surprise awaits Cassie.
Her old nemesis, Queen Kermilla has arrived, trying to get some money out of Cassidy. Kermilla is the Queen her whole old court left her for, and it appears as if they are regretting their choice. Kermilla is not fit to be a Queen, she is a spendthrift and totally selfish. And now she wants what Cassidy has, again. Cassidy sends her back home, and banishes her from her country, but Theran interferes with her decision by inviting Kermilla to stay as his personal guest.

It doesn’t take long for Cassidy to want to run, she can’t bear to live with Kermilla in the same house again, and see her use her flirting ways on her Court. So when Ranon finds out she is ready to leave them, he takes her home to the Shalador preserve again. And there they set up Court, without Theran who is as happy as can be with the woman he considers a true Queen. But he is blind to her true nature, and only sees her beauty. In the end, he will have to make a very hard choice.
Not only the Court joins Cassie in Shalador, some of the landen families she met want to join them as well. Theran wants to set up Lady Kermilla as the new Queen of Dena Nehele, and they really do not want to live under her reign. She is already abusing her power as a Queen, shoplifting and threatening people.

Cassie even asks Daemon to help with opening some shops in the small village that is her new home, and he agrees, and even loans her an amazing amount of money to use to rebuild her country and Court. The people start trusting Cassidy, and she even has a young Shalador Queen serving as her apprentice. And when she brings back their culture, embraces it, the Shalador people start to love her.

But her first probational year of being the Queen of Dena Nehele is almost over, and they all know that Theran will break her Court. They need to find a solution, and fast. Or there will be a civil war …


I really loved watching them rebuild the village; make a community, a home. Gray has come into his own, and when he is finally healed enough to be Cassie’s lover, wow, that was such a great scene. I enjoyed all the new Scelties as well, and how they guard the village against all villains.
Theran got what he so richly deserves, stupid blind man, and I hope he learns his lesson. But he will never be a part of Cassidy’s Court again.
Cassie is such a great character, down to earth and with a big heart. She is an outstanding Queen, and she reunites her people. I loved the building of the trust between them, and all the new developments. And of course the new Scelties, and how they charge people money to do their work.

So many great characters, such a vivid world building, I really wish I could go visit them, meet them all, and of course be a Dark Jeweled Lady myself.