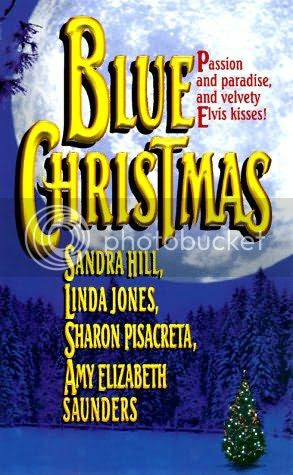 Elvis Loves!
On Christmas, while the world celebrates the birth of the King of Kings, Memphis awaits the return of one King in particular. Even during the holiday season, people come and go to Graceland – a pilgrimage of sorts – seeking redemption, happiness, and most of all, love.

Memphis shakes, rattles and rolls as four couples find themselves all shook up and learn that with the right partner, any place is paradise. But is there a rhinestone bedecked presence moving in the background, guiding their blue suede shoes on the path to passion, or is it simply their imaginations? And when it is time to open their gifts – and hearts – there won’t be a couple left who thinks that this was a ...
Blue Christmas.

This is a fun story, about the rich author G. Charles Van Dusen, who gets stuck in an airport restaurant after he is robbed from his coat, his luggage and his wallet, while he is working on his next story. His waitress Bailey O’Connor takes pity on him, and offers him a ride to Memphis with her. As his rich family is out of reach thanks to severe snow storms on the coast, he accepts her offer.
What he does not expect, is the fact that she is driving a Volkswagen Bug, has no real experience about driving in the snow, and is in the habit of picking up other passengers as well, all going to Memphis. And she keeps calling him Gabriel, the name he never uses.

It was fun meeting all those strange characters, a grandmother on her way to her children, carrying lots of fruitcakes, a runaway meeting up with his band for a gig, and a wounded flying Elvis who fell from the sky.

But those strange characters all bond together during the journey, and after they arrived, they go their separate ways, except for Gabriel and Bailey, who check into the Original Heartbreak Hotel together.

But when Bailey finds out that Gabiel is not really an Elvis fan, and is using her love for the King, and her remarks, to write his piece, he is severely in the dog house. Can the spirit of Elvis help him out?

Linda Jones – Always on my mind

As her little girl really wants a Daddy for Christmas, Laura sets out to find her former boyfriend, who doesn’t know he is a father. What she doesn’t know is that he has been searching for her for years, and her mother never told her. So he is overjoyed with this second chance at love. As an accountant, Laura really believe that Michael would never make it in the music industry, and she wanted a steady man who could put down roots, and not someone always on the road. What she doesn’t know, is that he has become very rich and successful indeed, and owns his own pub in Memphis where he plays in the evenings.

So with Megan staying with her babysitter and the ghost of Elvis in their hotel room in the Original Heartbreak Hotel, Laura and Michael take some time to get to know each other again. Will they forgive each other?

A lovely second chance at love story I really enjoyed. And of course, the part of Elvis.

Sharon Pisacreta – All shook up

Kim Hanson is desparate enough to come to Memphis at Christmas to have a chance to speak with Spencer Modine, owner of Modine Music, in order to get the PR contract. Her company is failing lately, without her having a clue why, and this is her last chance to prove herself, or go bankrupt.
But Spencer wants someone who understands music and Memphis, and not another uptight businesslady. But when she gets a panic attack right there in his office, he gives her another chance and takes her out on town. But he soon realizes that he wants her in his arms, as his wife, and not as his businessrelation.
But to get Kim to believe him, is not easy. Especially when they sleep together before he offers her the contract after all, and she turns him down.

But when he finds out for her why her company is failing, she does need his help to kick her two timing boyfriend’s ass!


I liked the story, but Kim was just trying too hard to impress Spencer, and too desperate for me to feel more for her than sorry, and really like her. The woman has no idea how to have fun at all, and Spence is trying to show her. With a bit of help from Elvis of course.

The rich and powerful Clayton Jessup III has inherited lots of properties from his rich and powerful father, and The Original Heartbreak Hotel sure does not fit in with the rest. He intends to sell it straight away, or raze it to the ground. So when he visits, and finds out that the Fallon family is doing a live nativity scene on the vacant lot nextdoor, with real farm animals, he is enraged. How dare they abuse his property for that! He will send them on their way asap!

But when he falls and damages his head, it is gorgeous Annie Fallon, playing Priscilla Presley, who takes him to the hospital and later home to the farm, as he needs to be watched. And there Clay finds a different kind of life, where people who have little are still happier than he has ever been in his mansion.

I did enjoy this story, although it was a bit over the top, the characters are fun.

These four stories are all interlocked. The characters all meet the others somewhere in Memphis, the Original Heartbreak Hotel plays its part, complete with Elvis’ ghost, an Elvis dressed as Santa outside the door, who seems to know everything, and the Hounddog café that serves Elvis’ favourite dishes. This book is filled with Christmas, Elvis, Elvis memorabilia, Graceland, and most of all, lonely people finding each other.

Even as a non-Elvis fan, I really enjoyed this book. Recommend if you can still find it somewhere. I bought it for the Amy Elizabeth Saunders story.