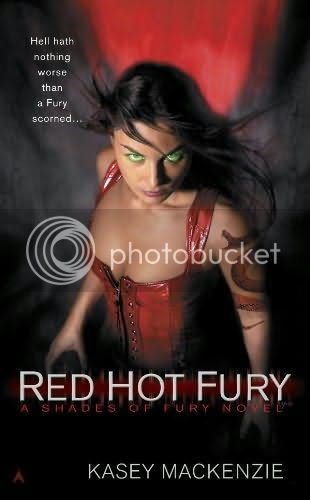 Hell hath nothing worse than a Fury scorned...

As a Fury, Marissa Holloway belongs to an Arcane race that has avenged wrongdoing since time immemorial. As Boston's Chief Magical Investigator for the past five years, she's doing what she was born to: solving supernatural crimes.
It's far from business as usual when the body of one of Riss's sister Furies washes up in Boston harbour. Riss discovers that the corpse's identity has been magically altered, but as soon as she reports her findings, she's immediately--and inexplicably--suspended from her job. Then a human assassin makes an attempt on her life, and Riss starts to realize that someone may be trying to stir up strife between mortals and Arcanes.
When a Fury gets mad, she gets even, and Riss is determined to untangle this case. Without the support of the mortal PD, Riss turns to the one man she can trust to watch her back--shapeshifting Warhound Scott Murphy. But since Scott is also Riss's ex, she'll have to keep a tight leash on more than just the supernatural rage that feeds her power as they try to solve a murder--and stop a war...


Well, the blurb tells you a lot about this action packed story. If you want something different from werewolves and vampires and demons, you have found it in this series. I really enjoyed reading this book, and immediately picked up the second book.
I love realms with lots of arcane species, and in here we have Furies, Harpies, Warhounds, Cats, Goblin, Giants and Sidhe (or are those extinct? or not?) a Phoenix and some other lesser known species. It was really fun to read about Marissa/Riss and her ex-boyfriend. Through miscommunication and magic their relationship wrecked a few years ago, but neither one has stopped loving the other. And now they are forced to work, and live, close together again.

Marissa is a Harpy. When in her usual human form, she is a gorgeous blond haired blue eyed woman, with snake tattoos on her arms. But as a Fury, she has black hair and green eyes, and those snake tattoos come to life to fight alongside her. I really enjoyed that. She can also disguise herself and look different, mousy, or sexy, just what the job requires.
And Scott, wow, he sure is worth looking at, and the genuinely cares for Riss. This second chance at love is just what he needs.

If you think: too much romance, well, it is all balanced nicely with the action and the mystery and the complots made by the evil guys. The romance goes slowly; both Riss and Scott have had their hearts broken before. There is fighting and stuff gets blown up. Long lost relatives and traitors to deal with. I also like the snarky sense of humor of Kasey Mackenzie, it is never cross or too much, and even though Riss is fast drawing (the wrong) conclusions, she knows how to apologize and is never TSTL. She is truly a kick ass heroine as I love them.

I do have one question mark left, concerning Scott’s younger brother who has a crush on Riss. Something is not quite right there, and I wonder what that is.

Yes, I really enjoyed this book and I do recommend it if you love paranormal romance mixed with your urban fantasy.