Lisa Renee Jones – The Legend of Michael – Read for #LLC2015 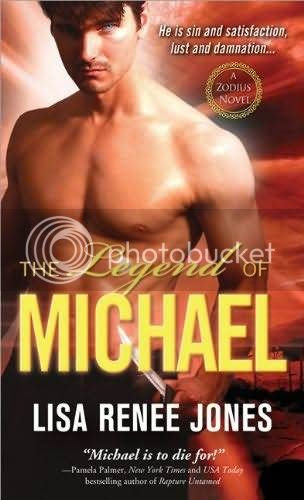 HE IS A LETHAL WEAPON...
One of an army of human soldiers injected with alien DNA, Michael is a legend within this new race, split between good and evil. Untamable, he has walked on the dark side and returned to the light. Feared and misunderstood, he leaves everything behind, including the one woman destined to be his mate.
HE IS HER ENEMY...AND HER DESTINY...
Cassandra holds the key to Michael's power, and his pain. With loyalties divided and against insurmountable odds, Cassandra's heart propels her to Michael's side-but can her love do anything but destroy him...
No ordinary woman can control a creature such as Michael, and only one thing is clear-the world will never be the same...


Wanting to create soldiers immune to a certain virus, or so they are told, an amount of elite soldiers is injected with alien DNA. And now they are involving, gaining different powers, changing into a different race of men. But some are developing new genes, and are becoming increasingly violent. And so the officer in charge plans to put them in a prison, and experiment even more on them with his secret laser weapon, designed to control them through torture.
But the soldiers escape, and take control over the facility, and now there are two groups: the rebels, under the leader ship of Adam and his evil mate Ava, and the good ones, still loyal to the Government, under leadership of his brother Caleb.
And then there is Michael, more powerful than any of the GTECH soldiers. And secretly mated to Cassandra Powell, daughter of the commander in charge of the project. But as the scientists in Area 51 / Groom Lake are experimenting on the mate bond as well, they keep their bonding a secret.

When the rebels split off, Michael goes with Adam as his second in command. And in the next two years, he has to prove his loyalty time and again. Until Cassandra is brought back in the program by her father, and Adam targets her, and Red Dart. He has to protect his mate, and will give up his undercover job to keep her safe. For Michael has been fighting for the loyal GTECH all this time. Adam is smart though, and he has planted some nuclear bombs in three major US cities that will go off when he dies. Michael has been trying to find the locations for those bombs, but has been unsuccessful so for. Now he can’t wait any longer, he will have to act.

When he discovers his mother has been working on ammunition capable of killing a GTECH, he is feeling even more betrayed. He knew his father didn’t care to whom he sold his weapons, but he thought his mother was innocent in his father’s business dealings. But she is the brain behind the Green Hornets, and even behind Red Dart. And she is sleeping with Commander Powell, he can smell it…

Time is running out on them …


A super soldier series is not new; I love Christine Feehan’s Ghost Walkers for instance, where the soldiers are injected with animal DNA. But these soldiers are evolving into a new race, and the alien DNA is totally cranking up their personalities. Those who are secretly bad and evil, are even more so, and those who are good, will stay fighting the good fight.
Adam wants to take over the world, become its King. After all, he is so much better than a mere human, he has power over wolves, and he uses them to keep his soldiers in line. Lucky for us, the alien DNA cannot be cloned, so he cannot create more GTECH serum to convert more people to his cause. But he has the ear of people in very high places, and gets all the funding he needs, as those men want to become supermen as well. Of course he does not tell them about the downside of changing DNA, the pain and such.

Michael and Cassandra are great together. Cassandra doesn’t know that Michael has kept an eye on her for the last few years, she thinks he went to the bad side. But when she is in danger, he doesn’t hesitate to blow his cover and protect her. And the longer they are together, the stronger the mating bond becomes between them, even if they don’t exchange blood as should have been the start of it all.

The action is very fast paced, and sometimes brutal. Adam is evil, but his mate Ava is a lot worse. She enjoys getting men in trouble with Adam and watch them get punished or killed by his wolves. And she is furious with Michael as he never shows any interest in her whatsoever.

It sure is a different series from what I have read before, but it took me a while to get into it. I sure liked Cassandra a lot, she stood up for her beliefs, and she fought for Michael and their future together. Yes, she did want to believe in her father and that he was not an evil man, until proven otherwise.