The second book in the Thorn St. Croix series, published May 1, 2007.
Genre: urban fantasy
Cover: my book has the smaller cover, and I prefer that one. 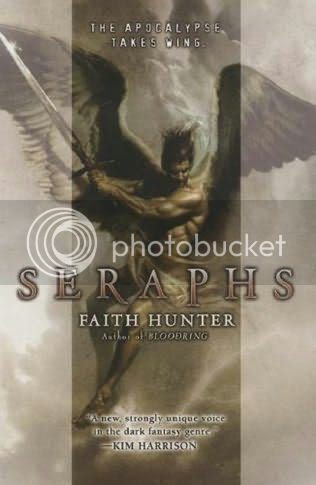 Living among humans in a post-apocalyptic ice age, neomage Thorn St. Croix has learned to count on her friends, but she's lost count of her enemies. She is a source of both fear and fascination for the people of Mineral City: Her powers can save them from the forces of evil, but also attract demon spawn and succubae. And fighting on her own turf nearly gets Thorn and those she holds dear killed.
But Thorn's ultimate test awaits deep under the snow-covered mountains beyond the village, where an imprisoned, fallen seraph desperately needs her help. There, hidden in the hellhole, the armies of Darkness assemble to ensure this subterranean rescue will be Thorn's final descent.


The previous book exposed Thorn as a neomage to her own townspeople, someone to be feared and to blame for everything bad. Some want to see her dead and others stand up for her. Religion is important after the apocalypse, when Seraphs showed up and killed most of humanity with plagues and other punishments for their sins. But the Most Holy, The Host, has not yet shown himself, leaving the religious leaders in turmoil. A few new religions have developed, some very strict ones, and they want to banish all joy and fun and sin from life. But the majority of people just want to survive this new ice age and make a decent living for themselves.
But the Darkness does not rest. Spawn is around at night, trying to find people to kill, to eat, to abduct and of course, to sway to the Darkness. At first Seraphs where a daily occurence, fighting the Darkness, but now they are rare, and neomages are kept in enclaves, hidden from normal humans. Only allowed outside by special permission and on special missions. But when Thorn came into her powers at puberty, she suddenly could hear all the other neomages in her head and it almost drove her insane. So her Elder smuggled her outside of the Enclave, and to mineral city, where she grew up as a normal child, always hiding her heritage.

Thorn is a stone mage, with an affinity for jewellery and stones. And when she finds out that a real Seraph and a Cherub are kept imprisoned nearby, she has no choice but to try to rescue them with only a few friends and allies as back up. Will they survive the mission?


It is a very intriguing series. And there is the question if it are really Angels and Demons fighting the ancient war of good versus evil, Seraphs against Darkness, or are these really aliens come to Earth to continue their own war? Yes, it has religion, but not really as I know it. And not of the stuff-it-down-your-throat kind of religion. Thorn doesn’t think she is religious, even if she goes to church (well, you really have to or you are in big trouble with the Church Elders, especially as a woman). As a neomage, she is supposed not to have a soul. After all, her “race” was not foreseen in the Bible. Nor that of the children of neomages and Seraphs, the second unforeseen.

I am truly fascinated by this storytelling. I like Thorn and how she struggles to make sense of what is happening, fighting the mage heat and doing the right thing. She has some great friends. So, post apocalypse, something I don’t really like, religion, which I also don’t really like in my books, and still I truly like this series. It is well written, fast paced, and just plain attention grabbing.