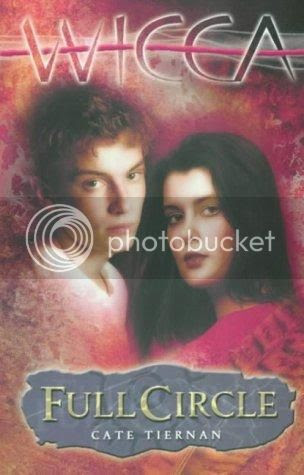 I thought the worst was over.
I am finished as a Seeker.
But now something is reaching out for me from my past.
The road ahead is uncertain.
Thank the Goddess I have Hunter.
Though Morgan will always be there for me…
I know that together we can face any foe
I know I must face my future alone.
Seventeen year old blood witch Morgan is being tormented by an evil spirit. Can she stop it before it destroys her?


Almost the last book in the series, and again evil is searching to kill Morgan. Bad nightmares are making her sleep walk, and drive, and it is terrifying. Who is after her this time? Why is she dreaming of Cal? Cal is dead, isn't he?
With the help of Hunter and Alyce (owner of Practical Magic), and some other of Alice's coven members, they try to help her sleep so deep that she can't be reached, and to fight back when she knows she is dreaming. And why is she dreaming of hawks all the time?
When she finally catches the one after her, it almost kills Hunter and Alyce and Bethany, until Morgan shapeshifts to lead the creature away from them.

Hunter has quit his job as a Seeker for the council, as he doesn't trust them anymore. They could have made sure he saw his mother before she died, as they knew where his parents were staying at the time. They didn't tell him when Ciaran MacEwan escaped, and other things. The council seems to be divided, with members doing things to benefit themselves. But what can he do, now he no longer has a job? So when some witches ask for his unofficial help, as their coven leader seems to be dabbling in Dark Magick, he gladly takes the job. Which is very handy, as his father has just crafted a spell, that takes away only certain magical abilities from a witch, and not all of their power.

And then, Morgan is given a scholarship for a very exclusive school in Scotland, to study herbs and magickal healing, exactly what she is so very much interested in. But how is she to convince her parents to let her go? It would be easier if it would be for math …

A very good book, lots of action and suspense. And perhaps finally a happy ending for Morgan?