The second book in the First Salik War series, published December 29, 2015.
Genre: science fiction with a hint of romance
Cover: ugly, not a scene in the book. 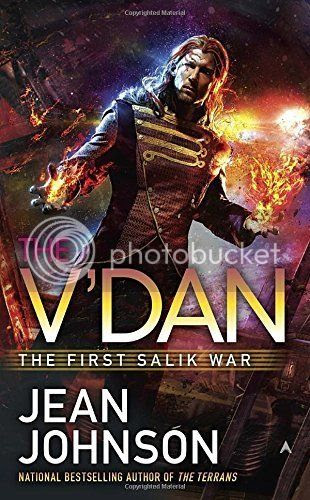 It is the age of the First Salik War. The battle against humanity has been engaged.

The V'Dan always believed they were the chosen race, destined to make a mark on the galaxy. For the last few centuries, they interacted peacefully with other sentient species - save for the Salik. Cold, amphibious, and vicious, the Salik were set on one goal: to conquer every race within their grasp.
Now that the Salik's ruthless war has begun, the fate of the galaxy is in the hands of two strange companions: Li'eth, a prince under siege and his rescuer, Jacaranda MacKenzie. A beautiful ambassador from the Motherworld, Jackie possesses more than the holy powers of a goddess. She brings a secret weapon - a strange, wondrous, and dangerous new technology that could be her and Li'eth's last and only hope to save their people from extinction...


I just finished this book, and I am speechless. I am all: o wow. o wow. No, it can't be finished, I need the next one! I need more! But alas, I just saw that I will have to wait 11 months! November 29, 2016 for The Blockade. But I guess the cover relieves some of my worries. Still, I want to know how/what/how!

So yes, I am guessing I am warning you for the enormous cliffhanger at the end of this book. If you really hate those, you should wait until the series is finished, because Jean Johnson, amazing author as she is, is way too good at writing those.

Okay, the book itself. I have to admit, while it was really interesting to read about this new species, the V'Dan, and how its origins are human, it was pretty boring at times as well. But always interesting, so I never skimmed or skipped pages. I liked the interaction between Jackie and her staff. I also love how earth has developed, has put an end to racism, and has now a single government, and without any corruption or insane salaries and bonuses. Amazing.

What I didn't like all that much, was the lecture mode Jackie fell into so often, every time someone started making a remark that was belittling humans, because without the facemarks the V'Dan have, we look like children in their eyes, she would interrupt them and start lecturing them on proper behaviour. That would go on and on, and was pretty impolite as well, especially when she even did that to the Empress, her mate Li'eth's mother. I really liked the Empress, and I wish there was a scene where the two women first met in person, and not as politicians.

I wanted more of Jackie meeting the other species in the Alliance, and to know more of the V'Dan's main religion as the priests are the ones with psychic powers. What happened to that one priest? I was also very much intrigued by the Immortal one, and would like to have a few more encounters with her.

I also completely understand Jackie's fear of the K'katta, a spiderlike race. I am just as phobic as she is, and really don't want to come eye to eyes with them, even though they apparently are very gently creatures.

But overall, a great new book in this very promising series. I really, really can't wait for the next book, but I will have to.