The first book in the Negotiator series, published November 1, 2007.
Genre: urban fantasy
Cover: good, but what a scary place to be. 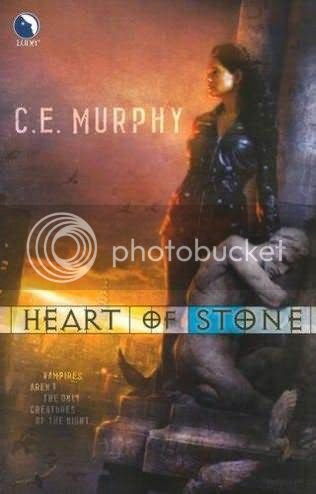 What secrets lie shrouded in darkness?
Okay, so jogging through Central Park after midnight wasn't a bright idea. But Margrit Knight never thought she'd encounter a dark new world filled with magical beings -- not to mention a dying woman and a mysterious stranger with blood on his hands. Her logical, lawyer instincts told her it couldn't all be real -- but she could hardly deny what she'd seen . . . and touched.
The mystery man, Alban, was a gargoyle. One of the fabled Old Races who had hidden their existence for centuries. Now he was a murder suspect, and he needed Margrit's help to take the heat off him and find the real killer.
As they worked together to figure out who was framing Alban, Margrit discovered that this man with a heart -- and body -- of stone made her feel more alive than ever, And as the dead pile up, it's a race against the sunrise to clear Alban's name and keep them both alive . . .


Hard to read this book, as I liked and disliked things about it. So, let's try a different kind of review:

Likes:
- the worldbuilding, with the different paranormal species that are totally hidden from the normal human world: gargoyles, selkies, dragons, djinn and vampires. Why only these 5? They represent the elements: earth/stone, water, fire, air. And yes, vampires don't fit that list. They might be true aliens. Some of the usual mythical lore works here, some doesn't;
- the story itself is what kept me reading, the little things we learned as the heroine learned them;
- all the paranormals we meet seem to be bad guys, except for Alban, who is naïve;

Dislikes:
- the heroine herself, Margrit, or Grit. She is a lawyer, and works as a defender for hopeless cases. She goes running in Central Park in the middle of the night, and that is just plain stupid. Also, how she reacts to all the discoveries she makes about the Old Races, is just too accepting, she is not surprised in the least, or at least not showing it on page;
- she keeps having this on/off relationship with a Detective, Tony, and tries to make it work, while she is very much attracted to Alban;
- she blindly goes into the Dragon's lair without thinking first, planning, or anything, and suddenly acts in the only right way in dealing with this dangerous man?
- the emphasis that she is black, and on racism because of that;
- too little background on Margrit herself, her family and why she has come to live with her friends as she is. With a little more explanation, I might have liked her more.

As I do have the next two books in the series I will probably read them someday.