Julie Hyzy - All the President's Menus 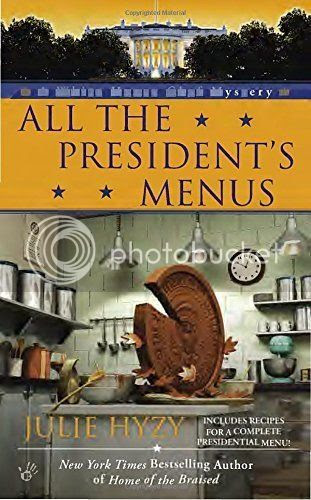 It's an old adage that too many cooks spoil the broth. But when a tour of the White House kitchen by a group of foreign chefs ends in murder, it's Olivia Paras who finds herself in the soup....
Due to a government sequester, entertaining at the White House has been severely curtailed. So executive chef Olivia Paras is delighted to hear that plans are still on to welcome a presidential candidate from the country of Saardisca - the first woman to run for office - and four of that nation's top chefs.
But while leading the chefs on a kitchen tour, pastry chef Marcel passes out suddenly - and later claims he was drugged. When one of the visiting chefs collapses and dies, it's clear someone has infiltrated the White House with ill intent. Could it be an anti-Saardiscan zealot? Is the candidate a target? Are the foreign chefs keeping more than their recipes a secret? Once again Olivia must make sleuthing the special of the day....


I think the idea of a government sequester is the strangest thing about American politics I have ever heard about. Just sending so many hard working people home without any pay, for an unknown amount of time, is beyond me. What are they supposed to do? Find new jobs immediately so they can pay their bills? Live on bread and water until they can come back and are expected to work hard again, and still be loyal? I would not want a job like that, with no security at all, doesn't matter the "prestige" of working at the White House.

But this book is about Olivia (Ollie) Parras, the White House Chef, who recently married her beloved Gavin, one of the senior Secret Service Agents. With only Bucky as an assistant, she still have to make the meals for the family, and give the president's son his cooking lessons.
And now, four strangers will invade her kitchen, and she is supposed to teach them how things are done in America, when there is a large reception or state dinner.
And in exchange, they will learn more about the Saardiscan cuisine.

The Saardiscan chefs are not happy to be there, it seems. Their society is not used to having women in leading positions, and they tend to ignore Ollie for Bucky. And the fact that a woman is running for president in their own country at the moment, is even more ridiculous. She will never be allowed to win! Something is off about those chefs, but Ollie can't put her finger on it. Only that they are certainly not of the calibre she is used to working with, two of them really lack basic skills. And why do they keep talking in Saardiscan, instead of in English, after being told repeatedly to stop? What are they discussing?

When the State dinner date comes closer, Ollie just has to know, but every intention of finding out more about these chefs, is thwarted, to the point where Ollie is followed and robbed in the interpreters house!

But in the end, it is Ollie who saves the day, because of a little dog …

Meanwhile, her private life is about to changes as well, as Gavin is given the opportunity for a severe career switch, when his former father-in-law becomes ill. They want him to take over the running of their vineyard. He never thought about that before, and neither has Ollie given a thought about a career after the White House, but she is also realistic enough, that the next president might not keep her on staff.


Another great addition to this series. I love the mix of suspense, with the private life of Ollie, and her interaction with her friends, and her former enemy and new boss, Peter Sargeant. I still think his assistant is a twit, and should be fired. I also love her neighbour, who is also recently married.
It was fun to learn a little bit more about the White House and its history. Apparently, there is a guest house on the opposite side of the road, and Ollie had to cook there. And that road is totally closed down for traffic at times.

The mystery was very good, and I sure would love to taste some of Marcel's creations (the dessert chef) as they are described so perfectly.