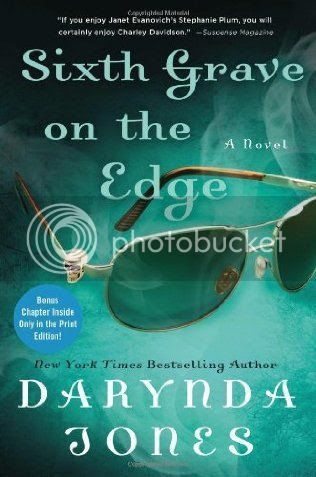 Most girls might think twice before getting engaged to someone like Reyes Farrow---but Charley Davidson is not most girls. She's a paranormal private eye and grim reaper-in-training who's known to be a bit of a hell-raiser, especially after a few shots of caffeine. Her beloved Reyes may be the only begotten son of evil, but he's dark and sultry and deeply sexy and everything Charley could hope for. Really. But when the FBI file on Reyes's childhood happens to land in her lap, she can't help herself: She opens it . . . and then the real fun begins. First, Charley finds a naked corpse riding shotgun in her car. Then, a man loses his soul in a card game. Throw in a Deaf boy who sees dead people, a woman running from mobsters, and a very suspicious Reyes, and things can't get any worse for Charley. Unless, of course, the Twelve Beasts of Hell are unleashed. . . .


I really enjoyed this book, I think the series is just getting better and better. In the previous book, Reyes proposed to Charley, and now she is tormenting him by not just screaming yes, but making him wait for it. Of course it is inevitable, and he will make her acknowledge that. But before that happens, lots of horrible moments occur first.
The fun things though: Cookie and Charley have concocted a plan to make her Uncle Bob jealous, so he will finally ask Cookie out on a date. It works, and it backfires amazingly. But it was fun to read about.
Amber and Quentin get into trouble when they ditch school to go sightseeing together. Quentin sees dead people, and the girl who finds him, absolutely terrifies him. It takes a lot out of Charley to rescue him, and to make the girl depart through her. Her short life has been so utterly miserable, because of her mother. Luckily, the woman is in prison already, or else.

A man has sold his soul to a demon, and now he needs it back. And so Charley comes into contact with the Dealer, and learns more about her own powers, her heritage, and perhaps her future. But Reyes is absolutely furious with her for getting herself into danger once again.


A great new addition to the series, and I will certainly read the Seventh Grave and no body soon. Especially after this ending!