A book in the At His Service series, published September 17, 2013.
Genre: contemporary romance
Cover: I am very glad my book has the smaller cover, as I don’t like that smirk at all. 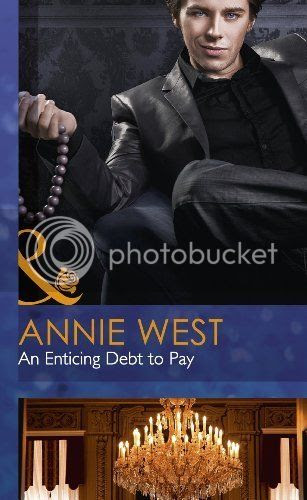 Forgiveness is a foreign concept to wealthy investment trader Jonas Deveson. Someone has been stealing from him. He's got a good idea who it is and she's going to pay....
Seeing the harsh lines that bitterness has carved into Jonas's handsome features, Ravenna Ruggiero knows he'll never see the shades of gray in her actions.
Jonas blackmails Ravenna into working as his housekeeper to pay off her debt, but living under the same roof leads to unexpected yet forbidden temptation, and Jonas is no longer sure who is being punished!


Jonas Deveson sees red when he finds out he has been robbed. And not just by anybody, by his father’s mistress, the woman he left his wife for, the same wife who killed herself because of it. And Jonas totally blames Silvia Ruggiero for the death of his mother.
When he finds Silvia’s daughter Ravenna in his father’s apartment instead of her mother, and she confesses to stealing the money instead, he takes out his revenge on her. That is fine with Ravenna, her mother is still devastated with grief for the loss of the man she loved so much, and Ravenna benefited from the money after all.
With the death of his father, Jonas has finally decided to re-open Deveson Hall, and he will make Ravenna clean it all, top to bottom, as his new housekeeper. He doesn’t know the extremely neglected state of it though, and Ravenna doesn’t tell him she is not fit to do such hard work either. She will protect her mother, cost what cost.

They both met only once, when Ravenna was a young girl, crying her eyes out, and Jonas comforted her. Ravenna has grown up an absolute beauty, and of course Jonas is handsome and rich. He build up the family fortune all by himself, even while he still was in university, as his father just flaunted it and lived the good life with his wife’s money.

But two stubborn people fall in love, and it was very much fun to watch.