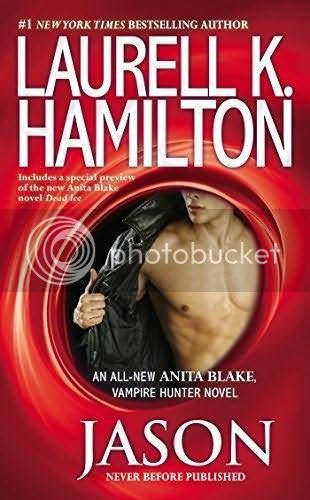 Enjoying pain with your pleasure is something you either get, or you don't. If you get it, then you don't really need it explained, because you know how good it feels, and if you don't get it then no amount of talking is going to convince you it makes sense."
But sometimes you have to explain the unexplainable, especially if the love of your life needs to understand, or she'll leave you. Jason Schuyler is one of Anita Blake's best friends and favorite werewolves, with benefits. J.J. is his lady love, an old flame from childhood who dances at one of the top ballet companies in New York. She's accomplished, beautiful, and she's crazy about him, too. Neither of them wants to be monogamous, so what could go wrong?
J.J. is enthusiastically bisexual, with an emphasis on the female side of things. She plans to keep sleeping with women, because Jason can't meet that need, just like she can't meet Jason's need for rough sex and bondage. J.J. doesn't understand why Jason isn't content to go elsewhere for a need she can't fulfil, so Jason asks Anita to help him explain.
Anita is having her own relationship growing pains with her only female lover ever, Jade. Jason suggests that J.J. might be able to help Anita with her girl problem, while she helps him with his kinky explanations. With some encouragement from a few other lovers in Anita's life she reluctantly agrees, and J. J. makes plans to fly into town for an experience that none of them will ever forget.


Yes, I know, I am a Laurell K. Hamilton junkie. I will read and love whatever she writes in this series. I have seen this book being described as one big sex scene, and that pretty much sums it up. First it is talking about rough sex, in particular about Richard, and why Anita likes that. And of course it is impossible to explain to someone who doesn’t enjoy that.
And then there is a lot of sex between Anita, Jason, J.J., Jade and Nathaniel.

But Aurian, you don’t like sex or sm and especially not F/F sex! Yes, I know, you are right, but this is Laurell K. Hamilton. And there is something about her writing style, that makes me read it.

Do you need to read this book to stay informed about the series? No, not really. It doesn’t add anything about the ongoing storyline at all, but it does have a nice preview about the next book, which will be a classical one again I think. But it also doesn’t have Jean-Claude in it at all. And I love Jean-Claude.
It does offer some relationship and sex advice and it makes Anita realize she is not just disliking sex with women, she just doesn’t like Jade and doesn’t want to keep making the effort to date her. So even though Jade is bound to her metaphysically, she can treat her just like she has some of the male shifters bound to her. Made them find other partners. And that is a big eye opener and relief, as Anita really wants to spend more time with the men she does love.

This one has F/F scenes in it.