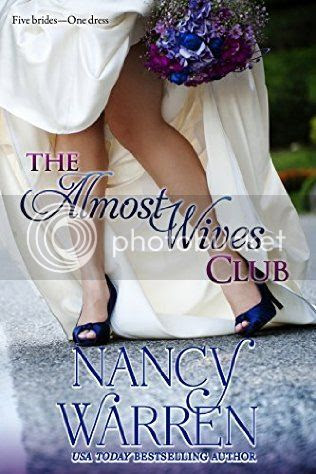 Kate Winton-Jones is marrying one of America’s most eligible bachelors. Edward Carnarvon III is rich, handsome, and hers. But at the final fitting of her wedding gown, one of the seamstresses jabs her with a pin, and a tiny blood spot appears on the outrageously expensive gown. Furious, the dress’s famous designer fires the clumsy seamstress on the spot, whereupon the girl declares the dress cursed and storms out. Kate doesn’t believe in curses. She’s modern, American and in love with the perfect guy. What could go wrong?


After a disastrous fitting of a weddinggown Kate doesn’t really like or want, her fiancé Ted takes her out to dinner at a nice restaurant. But before she can tell him about what happened that day, and that her dress is now cursed, he is called away for business, leaving her alone in the restaurant. And Kate really wants to leave as she hates being the focus of attention, when a handsome man joins her at her table, and just won’t take no for an answer. And even Ted’s stake as his own dinner.
To her own surprise, Kate likes him, and talks to him as she never does to a stranger. But when the man wants to take her home, she refuses. Instead, she decides to use her last money for a taxi to make a surprise visit to Ted. And a surprise it is. Ted and their parents have set her up. The stranger was to seduce her, or to prove her loyalty. Kate is wounded through and through, and ends the engagement at the spot. But no-one wants to believe that, even when she runs of in her coworkers old car. She needs some thinking time alone, and away from the pressure of especially her mother.

When Nick finds out the woman he was supposed to seduce is missing, he sets out to find her. He is a professional P.I. and was doing Ted’s father a favour. Not something he enjoyed doing, and Kate really made an impression on him. It is not difficult to find her, and he is surprised to see her enjoying a new life as a surf instructor in a small town on the coast. She seems happy, way more happy than in her pictures since she became betrothed. But will she have anything to do with him? He won’t tell her family where she is.

Kate enjoys her new life, the freedom and the simple joy of surfing again. But she has also not resolved anything doing with her upcoming wedding. As Nick points out to her. She has left that all to her mother and her fiancé, and they are acting as if the wedding is still on. Has she really made up her mind? And so Kate is forced to decide, and to act on it. But is there a future with Nick for her? After all, she just ended one relationship…


I really enjoyed this book. I loved that Kate stood up to her controlling mother, her fiancé and his parents. She managed to disappear for a while, and make a new simple life for herself. Even though she is rich, she never uses her trust fund, intend on living on her own salary and means and I admire her for that.
She also doesn’t jump into bed or in a new relationship with Nick straightaway, she takes her time and really thinks about her feelings and wishes. I like that.
And then there is Nick, who knows a lot more about Kate’s fiancé than she ever thought possible. When she finally finds out, she deals with it, and pushes Ned to stand up for himself as well. She truly never saw that side of him.

There are more little storylines in this book than meets the eye at first glance, and they kept surprising me. Of course there is room for Nancy Warren’s sense of humor and that always makes me smile. I am really looking forward to reading the next book.