Lynn Kurland – Another chance to dream 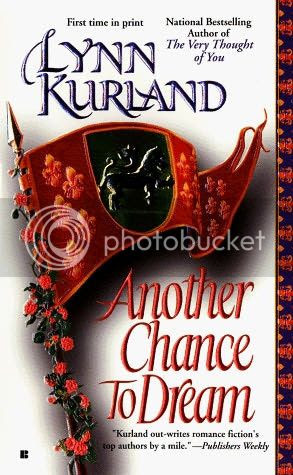 With neither title nor land, Rhys could not win the hand of Gwennelyn of Segrave. But he would always have her heart. The two are kindred souls...Rhys, a knight with far too many notions of chivalry for his own good. And Gwen, a lover of minstrel tales, waiting to be swept away. But Gwen is betrothed to another man, and Rhys fears he will lose her forever. Until a surprise offer comes his way -- bringing Rhys and Gwen a second chance at love and Another Chance to Dream


As a young girl, Gwen falls in love with Rhys, who is the youngest Knight ever. And he falls for her as well, but he knows he cannot have her without land and a title of his own. Gwen’s father has betrothed her to a man she really doesn’t like, and Gwen will do whatever she can to avoid her fate.

With Rhys in France on business for mother, Gwen’s father dies and her fiancée demands an early marriage. When she manages to escape his horrible keep, she runs into Rhys who has just arrived back in England. But before they know it, Alain catches up with them, and not only does he bind Gwen to his horse, he demands that Rhys honors his agreement to serve his late father one more year, by serving him instead. And not 1, but 2 years, or else he will beat Gwen with his whip …

And so their torturous relationship starts. Gwen can’t escape anymore and will have to marry Alain, and Alain makes Rhys her main guard. Lucky for Rhys, he has some friends at the keep, and he keeps himself as busy in the lists as he can. He won’t dishonour Gwen by having an affair with her, but when his service is over, he will go to France again for his fortune. Perhaps he can raise enough money to buy her freedom from King John.

He would only be gone for a year or so, but it has been 3 years now, and Gwen has heard nothing from him in all that time. What she doesn’t know is that Rhys has written faithfully to her, but that Rollan, Alain’s brother who covets his brother’s title and possessions, including his wife, has intercepted all those letters they have written each other. So when Rhys thinks Gwen is awaiting him with open arms, Gwen is furious with him, and tries to refuse him entrance into the castle.


A lot of waiting for Gwen, and intrigue but overall it was a fun story. Even though Gwen was married to Alain, who is a pig and has a mistress or a few, he gave her three children, and she loves them. She will do nothing to jeopardize her son’s inheritance. So she will not have her marriage annulled and her children announced bastards just to be able to marry Rhys instead.

The fun part was with Rhys’ family, they sure a eccentric’s. His mother is a powerful abbess, his father is dead (or so he thinks), and his grandfather is a spy. And they have all been keeping important secrets from him. Like the fact that he is not a landless knight, he has enough properties and a title so he could have married Gwen back then.

Rollan keeps plotting and planning his evil deeds just for his own laughs.

But there is also a little girl, granddaughter to the local daughter, who is a very interesting character, even though she is only 10 years old.

I have read some of Lynn Kurland’s books over the years, but this is the first in the series, and how it all started. I do have dozens more of her books on my shelves, and hope to read some more books soon. She has a light writing style, easy to read, and with enough humor thrown in.