The third book in the Last Bachelor Standing series, published May 20, 2014.
Genre: contemporary romance
Cover: if my contractor looked like that, I would keep rebuilding my house! 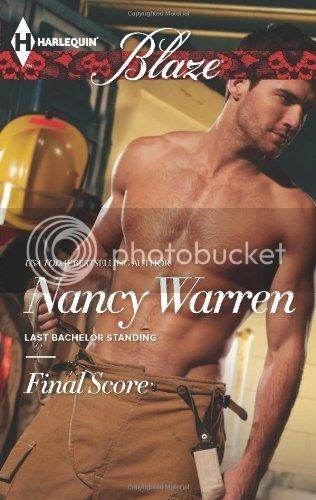 The last man holding out is firefighter Dylan Cross - strong, tantalizingly hot, with a reckless streak a mile long. He's also Mr. June in the firefighter calendar. But while Dylan will risk his life without a moment's thought, he would never risk his bachelorhood....
Dylan made a deal to help Cassie Price renovate her new home. But having a mouthwatering Mr. June fixing up her place is more temptation than Cassie can resist. And really, doesn't she deserve a little fiery fun now and then? But keeping her cool with this sexy confirmed bachelor is almost impossible...and if she's not careful, she'll find herself playing for keeps!


Cassie Price just bought herself a home, a fixer-upper. A good investment according to her parents and her broker. But now she doesn’t know where to start! Her friend Adam is busy with his own home renovation and his upcoming marriage, but he recommends his friend Dylan Cross. Dylan is on suspension for three months after ignoring a direct order from his boss and endangering not only himself, but two other firefighters as well. Sure, he saved a man, but he needed saving in return! He is just too reckless.
As a hobby, Dylan buys houses to renovate and sell again, and at the moment he is free to work for Cassie. It is just the house he would have bought himself, and their ideas about what the house needs and what Cassie wants, are very much alike. They work well together, until they suddenly start seeing each other with different eyes, and their relationship is awkward for a while. But when they do become lovers, life is perfect. They certainly burn up the sheets!

Until Cassie finds out that Dylan is not willing to move forward, he just likes the status quo. Cassie wants more from him. And so Dylan has to find out more about himself and his motives, why is he endangering himself, does he want to end up like his father? A dead hero? Or is that why he doesn’t want a relationship, he doesn’t want to leave a grieving widow behind?

Adam and Serena are in trouble though. Adam never got over his scare of almost losing Serena to a serial killer and he has become over protective, having her followed by his coworkers, and adding tracking devices to her car and purse. Serena can’t live with that, she refuses to marry a stalker.


Like the other two books, I really liked this third one. I like Cassie, she is a strong woman, she has a job she loves, and she knows what she wants. She is grateful for Dylan for helping her renovate her home, but she deserves more than he is willing to give.
I really liked how the three women in this series became friends, Serena and Cassie already are friends, but they embrace Clare in their midst as well, and I love their conversations about their men.
Max, Adam and Dylan are still practicing for Badges on Ice, determined to win the cup this year. And of course they also talk about their relationships.
Dylan and Cassie certainly burn up the sheets, a lot more than the previous couples. They fit really well together. And after Dylan rescues a little kitten out of a tree, that kitten becomes a fun secondary character as well.

Nancy, can I have a poster of this Mister June please?

I love Nancy Warren’s writing style, her sense of humor and her wonderful characters. So far, I really like them all, and can’t decide on a favourite. If you want to try her books, you can’t go wrong with this series.