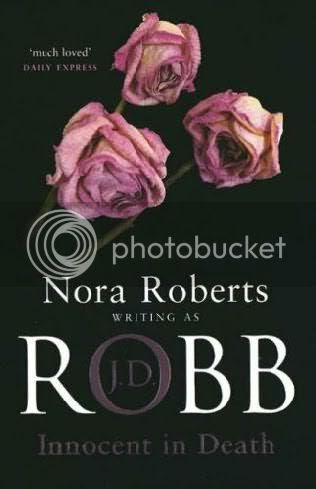 When history teacher Craig Foster is found dead in his classroom, his young wife is devastated, and his family, friends and colleagues all shocked. The two ten-year-old students who discovered his body may be traumatised for life.
Eve Dallas, of course, is more hardened to murder cases. And this is clearly a murder case – Foster’s thermos flask of hot chocolate tainted with deadly ricin. It’s Eve’s job to get a feel of all the potential suspects – and find out why someone would have done this to a man who seemed so inoffensive, so pleasant, so innocent.
But Magdelana Percell – now there’s someone Eve can picture as a murder victim. Possibly at Eve’s own hands. An old flame of her billionaire husband Roarke, she’s turned up in New York, and she’s anything but innocent. Unfortunately, Roarke seems blind to Magdelana’s manipulation, but not blind at all to her shapely figure and flirtatious ways. Eve’s so unnerved by the situation, that for once she’s finding it difficult to concentrate on her investigation. Still, she’ll have to put aside her personal heartbreak, for a while at least – because another man has just turned up dead …


Eve and Roarke are just home from a nice beach vacation, which they really deserved after witnessing Mavis give birth to her beautiful baby daughter. Eve is supposed to join him for dinner with some business relations that night. Something she really hates, but cannot always get out of. Having just caught a new case, where a young history teacher is murdered in his own classroom, she is late. No time to dress up, she has to hurry to the posh restaurant in her work clothes. Luckily, they are clean this time.
Then a stunningly beautiful woman in a red dress approaches Roarke, a woman from his past. Now that is nothing new to Eve, as Roarke certainly wasn’t a monk before they met. But this is different, as for just a tiny moment, Roarke looked at this woman the way he only ever looks at her. And when she finds out more about Magdelana, she is really frightened. Roarke is baffled by her jealousy, doesn’t understand it, and certainly will not give in to it. Magdelana is just an old friend, and he can meet her when he wants to. But he also notices this really hurts Eve, and he hates that. And for once, Summerset agrees with Eve, which pisses Roarke off even more.
Is this their first really big fight? Or a break between them?

It puts Eve of her stride with her work, she cannot seem to find the motive that killed Craig. But she does find another teacher, Reed Williams, with a questionable morality. He hits on other staff, teachers and parents for sex, so he is a prime suspect as Craig has warned him of repeatedly. Things get more difficult and twisted, when Oliver Straffo defends the man. It was his daughter who discovered the body, his wife who had an affair with Reed. And he wants to defend the man? Of course he doesn’t know about the affair (yet).
But then Williams gets killed in the school swimming pool, and Eve needs to find another suspect. She is looking very hard at the school principal, and would like to nail her for claiming rape when it certainly was not the case, but it still feels off. And when she finally finds out who the murderer has to be, no one wants to believe her. The truth is just to horrible. But she will have to find more evidence, and bit by bit she comes closer. But will she be in time to prevent the next murder to happen?


A great book again. Both on the private life of Eve and Roarke, as the case. I really cried along with Eve, how could Roarke not see what was happening? He knows Magdelana is a con artist, she knows how to net her mark, of course she wants him back now he is so mega rich. But when his eyes finally do open, he gets even with her, for putting his marriage at risk and causing Eve pain.
And then the case, two teachers murdered, but what is the motive? It is not in their private life, at least not with Craig. And when Eve suspects this person has killed before, it gets even more horrible. A family torn apart, and a father who has to choose: his wife, or his child.