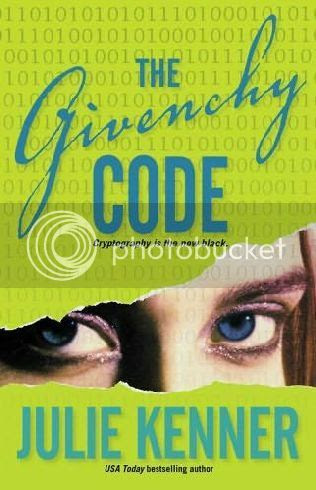 A mind-bending code spawned from the mind of a madman...or maybe just a jealous ex.
A desperate race through the cathedrals and hotels of New York City...with a teeny bit of time for shopping, it's true.
An astonishing truth concealed for years, unveiled at last...with more than a little help from a supercute new guy.
As if a recent breakup, scrounging for rent money, and lusting after designer shoes weren't enough to make graduate student Melanie Prescott's life challenging, suddenly she's practically lving The Da Vinci Code. A mysterious stranger is sending obscure codes and clues her way and she soon dicovers she has to solve them in order to stay alive. With stakes like that, her dissertation on "the derivation and primary characteristics of codes and ciphers used by prevailing nations during wartime" is looking a little less important that it was yesterday. Right now she's just worrying about living to see tomorrow. The only bright spot in the whole freakish nightmare is Matthew Stryker, the six-foot tall, dark, and handsome stranger who's determined to protect her. Well, that and the millions of dollars that will be her reward if she survives this deadly game. And she'd better survive. Because that's a heck of a lot of money to be able to spend on shoes and handbags and sunglasses and dresses, and, well, it's hard to be fashionable when you're dead.

Join bestselling author Julie Kenner on a heel-breaking adventure in code-breaking that will bring out the math geek and the fashionista in you.


I’ve never read the Da Vinci Code, or seen the movie, so I have no idea how much of this is similar. Melanie does compare herself a few times to Jennifer Garner, the heroine in the tv series Alias, and I did watch and enjoy that one years ago.

Melanie is a smart girl, with a flair for math and a passion for fashion, especially shoes. She is doing odd jobs to pay for college and is just walking a few dogs when her ex-boyfriend finds her. She has no intention whatsoever to hook back up with him, but he has just given her a pair of Givenchy shoes, so what is a girl to do when he asks her out?
Especially when a handsome man gives her an envelope, in the middle of the street, and said ex takes it with him to make sure she shows up.

Later in his apartment, Melanie finds a letter in code, something that is a big hobby of her. But when she deciphers it, it is a message saying: Play or Die, with an address beneath it.
She doesn’t know what it means, but she certainly does not intend to follow up on it. Unable to sleep, with her ex-boyfriend snoring as he does (yep, she remembers why she broke up with him), she settles herself in the bathtub. But the next morning she doesn’t only hurt everywhere, she finds Todd murdered in the bed …

As the phone line is dead, she runs outside the apartment building to call the police, only to stumble into the handsome man who delivered the envelope to her. And he tells her no police, she will have to play the game, or else …
Scared out of her wits, Melanie escapes and runs back to her own place. Where an other stranger is waiting for her. She doesn’t trust him and tries to run again, but he finally manage to convince her he is there to help and protect her. They have been drafted to play an internet game in real life, and as he has failed to protect one woman before, as he did not believe the message, he is not ready to lose her as well. He is a previous Marine, so he should be able to protect her from the assassin. The game is simple, you are either an assassin, a target or a protector. And the target has to follow the clues to the treasure, while evading the assassin, to win the game. Melanie used to play the game until she got bored with it, as she won every time. Stryker never played it, although he did sign up for it as his friend kept urging him to, but he was deployed again before he had time to try it.
The assassin, he loves the game, and he loves it even more in real life. This is what he was born to do! He will win the game, as he always does, no matter what role he plays. But he likes being the assassin best.

And so Melanie and Stryker are sent on a treasure hunt through Manhattan, deciphering clues and following leads. Narrowly getting out alive a few times. And all this because a dead millionaire is playing games from behind the grave …


I really enjoyed this book a lot. Even though I am not a geek, so the math and code went way over my head, and I am not interested in fashion at all. I liked Melanie, she is no airhead and her family live was not wonderful and easy, and she is so very smart. But she is also afraid to stick her head out and really go for what she wants. And Stryker sees that, and encourages her to just go for it. They make a great couple, and they work very well together. At first Stryker sees Melanie as just a job, his to protect, and being a bodyguard is his current business. But she grows on him, and when you just escaped a certain death, you really want to celebrate being alive …

But will their relationship continue when the danger is over?

It is a fun book, and I think if you like math or fashion or both you will enjoy this as well.